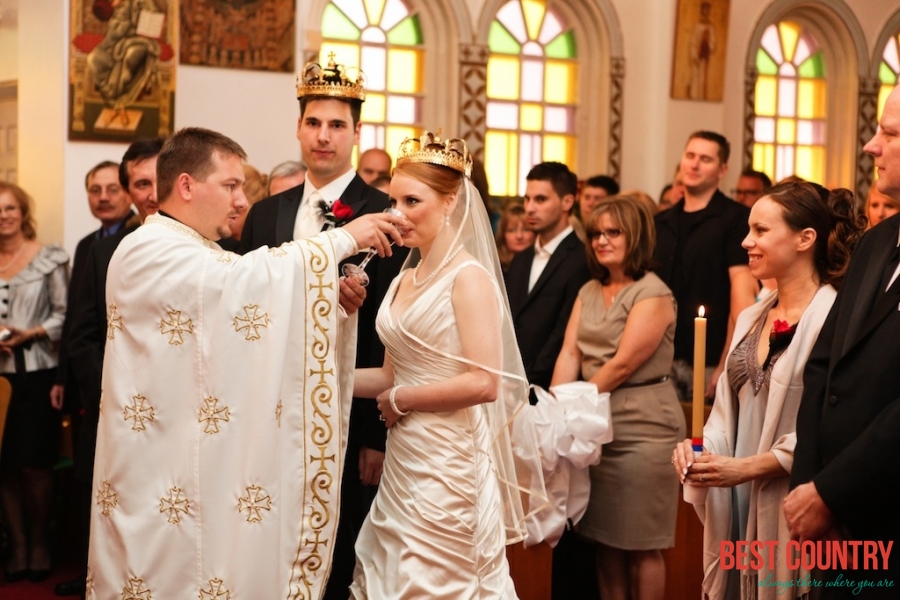 Serbs are Orthodox Christians, and as such, are facing faith and church. Accordingly, much attention has been given a church wedding as seriously sanctity marriage, which is the basis and foundation of the family, and thus the church and state.

On the wedding day, before coming to the bride, a prayer is held in the groom's house - for a happy time and a blessed wedding, as well for the happy life of newlyweds, after which guests go to bride's home.

Before they enter bride's house, her father places an apple on the highest tree in the courtyard, for groom to hit with a riffle, after what, people can enter.

In that time, bride is preparing another apple, pinning coins in it, which will later after the wedding, throw over her head - it is said that the man who gets it marry next.

The custom of buying the bride is practiced till today, but in funny and entertaining way.

Groomsman is the one who buys, and bride's brothers or uncles are the ones, who makes things a little harder.

After bying, everyone are headed to the church, and groomsman's duty is to keep the bride till the wedding act, because her family can take her back, in order to repeat the act of bying.

When the couple come to the church, they are followed by the godfather and godmother right before the altar doors.

Then, the ceremony is performed, godfather gives wedding rings, and they put them to one another on the fourth finger of right hand.

Rings represent the symbol of the common life and the oath of fidelity, which couple choses themself.

During the ceremony, the couple and godparents are holding candles, which they live to burn in the church, for the sake of a happy marriage.

During the wedding ceremony, couple's hands are tied, which represents union strenght in a way that it provides birth and marital happiness, as well as to protect the bride from the bad influence.

Also, assembling the hand can mean a sign of faith that two people give each other.

They carry crowns on their heads, which replaces wreath of laurels leaves and drink red wine from a single, usually silver, cup, which represents a substitute for the sacrament of Communion.

Biedermeier - the wedding bouquet which carries all the time, the bride throws after leaving the church and it is believed that who ever gets it, is the next one to be wed.

In Roman times, those bouquets were not made from flowers but from the fragrant herbs that have forced the evil spirits from the future home of newlywed couples.

Today, elaborate arrangements have been replaced by different types of flowers. Also, in front of the church's door, godparent throw coins per wedding, which should symbolize the couple being expected in the common life.

And when all this is done, it is time for the wedding celebration, which begins with music, good food and drink and lasts until the early morning hours, and in some parts of Serbia takes on even more.

In some parts, it is popular to steal the bride's shoe during the wedding celebrations - often done by a child from a family, and return only when the groomsman pays symbolic ransom for it.

Cutting the wedding cake, which together perform the bride and groom is also a very old tradition which symbolizes the unity of the young couple.

And of course, when all is complete and the bride and groom go home - he transferrs her over the threshold.

This is the old Slavic pagan custom in which it is considered that the spirits of ancestors live in the threshold of every house, so in order to avoid treading, the groom transfers her respecting his ancestors.