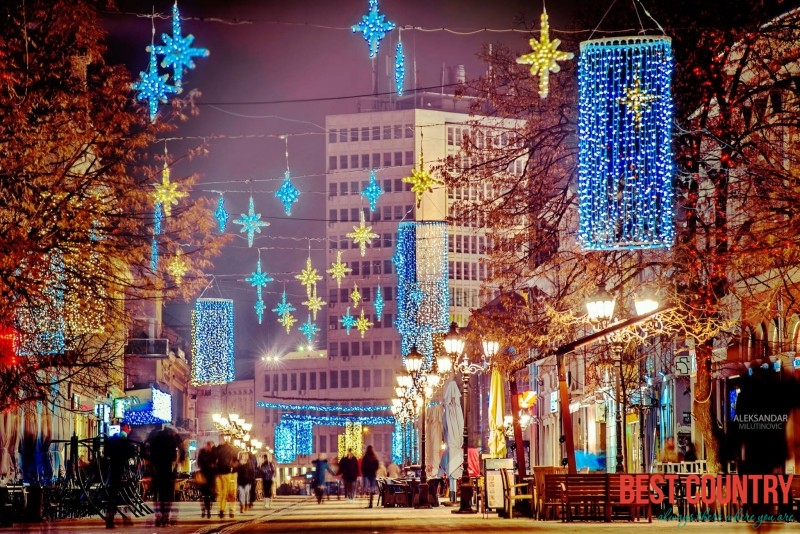 For holidays, such as Christmas, the Orthodox Calendar is observed which means that Christmas is January 7th and Christmas Eve, of course, would be the 6th.

The season of Advent, or the time leading up to, Christmas begins 6 weeks prior to Christmas Day - November 28th.

Many people of all faiths use advent as time of preparation for the birth of Christ. In most cases, the person chooses his or her own means of preparing for this pivotal day.

In the case of Serbians, it is common to avoid any meat products or by-products during Advent. This includes meat itself, eggs, milk, and cheese - anything that is produced by an animal.

Christmas Eve is the last day of the Advent fast and, although it is a day filled with restrictions it is also a joyful day because it is known that Christmas is the next day.

Christmas is a tremendously joyous and religious days to Serbs. All but a few attend some religious service.

In the old country and in times gone by the Father would take all of his young children with him to the country side on Christmas Eve and together they would cut a Badnjak or Christmas Eve Tree.

This tree was not the Evergreen or fir tree that we are all used to but rather a young oak tree and was actually more of a Yule log than tree. . More often than not, people today buy the badnjak, but it is not burned in the fireplace until Christmas Eve. There is a ritual involved with the cutting.

The young oak or Yule log is cut into three pieces, each representing part of the Holy Trinity. The father brings each piece into the house, and if there are sons they help with the ritual.

As each piece is laid in the fireplace a greeting of "Dobro vece I sretno badnje vece" is recited (Good evening to all and happy Christmas Eve.)

They will also gently toss a handful of new wheat onto one another with a wish for health and wealth for the entire family.

Of course while the father and sons are carrying on this ritual the mother, grandmother and any daughters tended to the children and preparing the food.

The food for this meal, The Fasting Supper, includes vegetables, nits and fruits, and not, as mentioned above, any meat or meat by-products.

The oldest male finishes dinner by throwing walnuts into all four corners of the room, signifying the sign of the cross.

In very traditional families a Christmas candle is now lit and placed in the middle of the table. It is not uncommon for the family to sing a hymn together at this time.

You will often find a pot or container of some sort with straw placed inside. This is symbolic of the manger in which Jesus was born.

After an early morning service at the Church on Christmas Day guests begin to arrive. The order of arrival is also significant, the first being a very close friend and an honored guest, almost always male.

He will go directly to the Yule log in the fireplace and says to the host "Christ is born". The host will kiss the guest on the cheek and respond "Indeed He is born."

As each guest arrives the same greeting is exchanged. This ritual greeting will continue for the three days of Christmas.

Of course no discussion of tradition would be complete without talk of food. A special Serbian bread, (Cesnica or Chesnica), is baked with a coin inside. Getting the piece with the coin is reputed to bring luck throughout the year.

In the United States we also celebrate St. Nicholas Day, in most cases on December 7th.

In Serbia St. Nicholas Day is celebrated on December 19th. In both cases it is a religious reference to the saint who later turned into Santa Claus - the gift giver.

Until quite recently Serbia was under communist control - a result of WWII. Needless to say St. Nicholas and even Santa Claus were frowned upon by the communist government.

They attempted to replace the tradition with an entity called Grandfather Frost. Grandfather Frost was similar in style, but had no religious background and did not come until New Year's Eve.