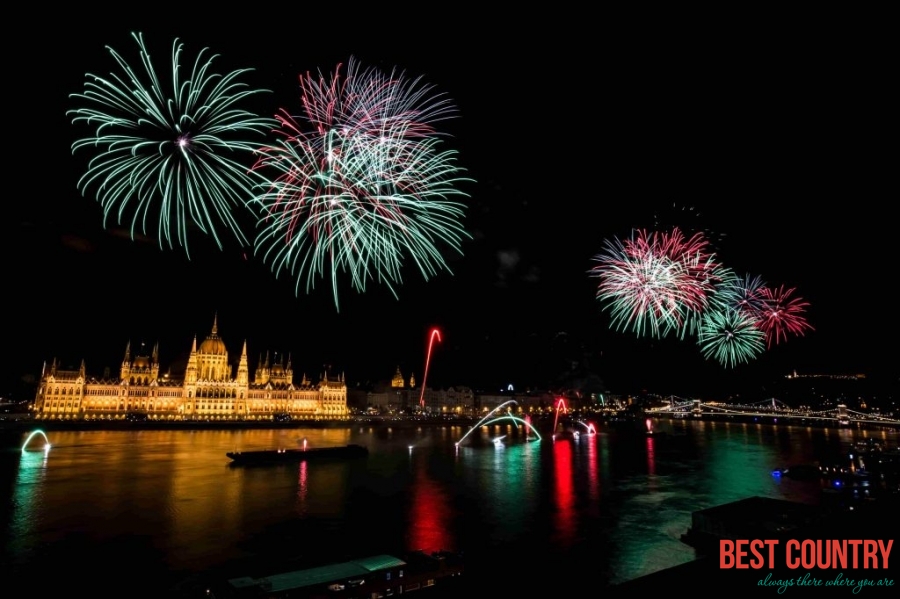 Besides the standard merry-making, there is also a New Year's ball and concert at the Hungarian State Opera House in Budapest. Stalls on the streets of Budapest sell masks and noisy paper trumpets.

Formal balls are held all over the country.

Costume parties and carnivals take place all month long to mark the end of winter,
especially on the last Saturday in February. City festivities usually include carnival, parade
and open-air music concert.

Men give flowers to women both at home and work.

The “Hungarian spring” - a bloodless fight for freedom against
Habsburg domination which later led to war against Austria and its allies
(at the time: the Croats and Romanians).

The main demands of Hungarians were: freedom of the press, and the
establishing of a Hungarian parliament in Pest with its government.

Revolutionists also demanded freedom of religion, a jury, a national
bank, a Hungarian army, and the withdrawal of foreign military presence
from the country.

In 1849 Russia intervened on the side of Austria, and won. The Austrian
retorsion included the execution of 13 generals of the Hungarian
revolutionary army and of 5 civilian leaders of the short-lived independent
Hungary. One of them was the first prime-minister, count Lajos
Batthyany.

Each year on March 15, the Hungarian tricolors of red, white, and green
are prominently displayed all over the country.

Easter is an important religious holiday in Hungary. The day before families with children
paint easter-eggs of all styles and color. Children find small gifts beside their beds early
Sunday morning. A traditional breakfast follows of easter-eggs, ham, braided cake bread,
horse-radish and hot chocolate. Many families go to church this morning to celebrate the
resurrection of Jesus Christ.

On Monday, many people carry on the tradition of "sprinkling". While once young men
used to pour buckets of water over young women's heads, today they spray perfume or
water and then ask for a kiss and a red egg. Painted eggs as well as chocolate-ones are
exchanged.

First Sunday in May

Mothers receive flowers, sometimes hand-picked, and other presents, usually handmade
from their children on this day.May 1

Workers unions organize a celebration in Városliget (Budapest's City Park) with
speeches, acrobats, clowns, food and music.Last Sunday in
May

Parents take children on special outings to places such as the Zoo, fun fairs, or on family
nature walks (kirándulás) in the Buda hills.

In the year of 1000, Hungary’s first king, the Christian St Stephen, was crowned this day,
and the Hungarian (Magyar) state was founded.

Traditionally, the first bread from the new harvest is baked for this day
In 1949, Hungary (then the "Magyar People's Republic") accepted its constitution.

Parades and music are among the festivities, and an impressive fireworks show is
launched over the Danube at night.

Holland & Spain withdrew from Olympics, to protest Soviets in Hungary. UN demanded USSR leave Hungary. In November, after lots of bloodshed, the Hungarian revolution was put down by the powerful Red Army of the Soviet Union. Imre Nagy and many other leaders and participants were executed by the soviet regime. Soviet troops stayed in Hungary until 1991.

All Saints' Day – Mindenszentek napja
People remember their deceased loved ones by lighting candles at their graves in
cemeteries.

While Halloween is not celebrated in Hungary, you can find several expat-inspired events.

Children put their clean boots on their window-sills the night before. In the morning,
“Good” children find candy, nuts and fruit, sometimes even small toys in their boots, while
“bad” ones get bunches of twigs (virgács). Mikulás, however, never finds entirely wicked
children in Hungary.

Most kids then receive both candy and virgács.December 24, 25, 26

The traditional family Christmas celebration, dinner and
exchange of gifts takes place on the eve of December 24th.

The 25th and 26th are public holidays when relatives visit
each-other. Hungarians set up their Christmas tree on the
24th, and leave it on until it lasts.

Vörösmarty tér features a large Christmas tree, and there is
a cheerful and cosy outside Christmas market there. Live
music is often heard in the city.

Namedays - Névnap in Hungary are special days celebrated on a day designated for a
person's name. Small gifts are given.

It is like a small, low-key birthday celebrated in the
workplace, where people will usually not know when their college's birthdays are.
Namedays are also celebrated among friends and family.

The traditional gift for women is a flower arrangement or bouquet, and men are usually
given a bottle of wine. Children will enjoy an inexpensive toy, a few books or chocolate
bars.