Budapest is the capital of Hungary

With the Danube River as its pulse, Budapest beats to a rhythm of indomitable spirit cloaked in beauty and charm. And no wonder. The Hungarian capital is exquisitely laid out on both sides of the Danube, claiming one of the most spectacular panoramic views in all of Europe. 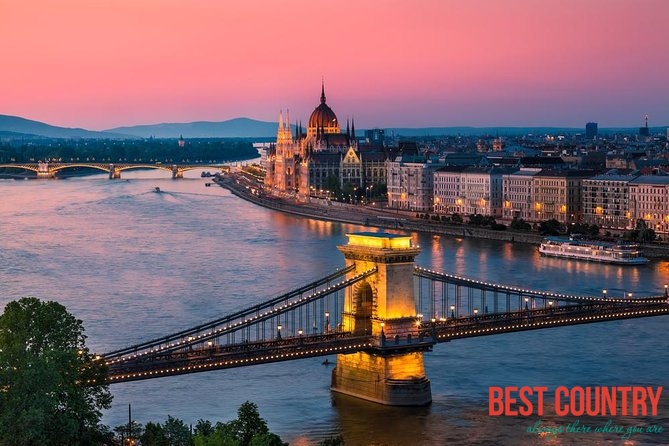 You can bear witness from the Buda side of the river, on Castle Hill. From here, the spires of Parliament and the Chain Bridge can be seen awash in golden light every evening. Their reflection on the Danube, combined with -the dotted lights of Pest, are simply awe-inspiring.

So are the buildings of Castle Hill: the neo-Gothic Matthias Church, surrounded by quaintly restored medieval homes on cobblestone streets; the imposing Royal Palace, which houses the National Gallery and its precious works of art; and the turreted Fishermen`s Bastion chat rounds is all off.

The capital of Hungary straddles a curve of the Danube River where Transdanubia meets the Great Plain.

One Hungarian in five lives in Budapest, and Debrecen, the next largest city, has only a tenth of the capital`s population. More romantic than Warsaw, more cosmopolitan than Prague, Budapest is the `first city` of Eastern Europe.

Strictly speaking, the story of `Budapest` begins only in 1873 when hilly, residential Buda merged with flat, industrial Pest and little Óbuda to the north to form what was first called Pest-Buda.

But a lot of water had flowed under the Danube bridges by that time. The `Romans built the town of Aquincum here, and you can still see their aqueduct and amphitheatres just north of Óbuda.

Layer upon layer of history blankets Buda`s Castle District, and Pest`s ring roads are a testament to the Hungarian and Austrian engineers and architects of the 19th century.

Add to this city parks brimming with attractions, a chair lift and cog-wheel railway in the nearby Buda Hills, riverboats plying upriver to the scenic Danube Bend, and hot thermal baths in Turkish-era bathhouses and you have Budapest.

The city has many more fascinating aspects. Many Eastern Europeans and Russians come here to make money or get a taste of the West, while Westerners revel in the affordable nightlife, theatres, museums, restaurants and cafés.

As the river descends from the Black Forest to the Black Sea, few cities are more striking than this `Queen of the Danube`. It`s hard to get enough of Budapest.

For relaxation, Budapest offers the best! Such as the venerable Café Gerbeaud and Café New York, grand icons of the days when the Habsburgs ruled the Austro-Hungarian Empire. And of course the selection of fine restaurants is unbeatable.

A light stroll through the sights of Buda is perfectly complemented by darting through the bustle of Pest. The glittering Váci utca (street) offers up some of the best shops in the city.

Office buildings, shopping malls and supermarkets are set in perfect harmony with the elegant St. Stephen`s Basilica, as well as the sprawling Heroes` Square, bordered by, the neo-classical Museum of Fine Arts.

Beginning with the international classic, Gundel, to the quaint local establishments. Perhaps the ultimate haven is Margaret Island, a sanctuary of forest, flower beds, manicured lawns and sports facilities in the middle of the Danube.

No matter what you do by day, you should always be ready for Budapest by night: the Opera, concerts at the Vigadó, theatre, casinos - the possibilities are endless.

You will easily see why Budapest captures the imagination - yours, the city`s 2.1 million residents and, in fact, the entire world`s.