How do you normally welcome in the New Year? In Great Britain nowadays most people celebrate by popping the cork of a bottle of champagne and toasting for luck during the coming year. There is much kissing and arms are linked and ‘Auld Lang Syne’ is sung. But where do all these traditions come from and is the day that we celebrate as New Year’s Day really the first day of the year? 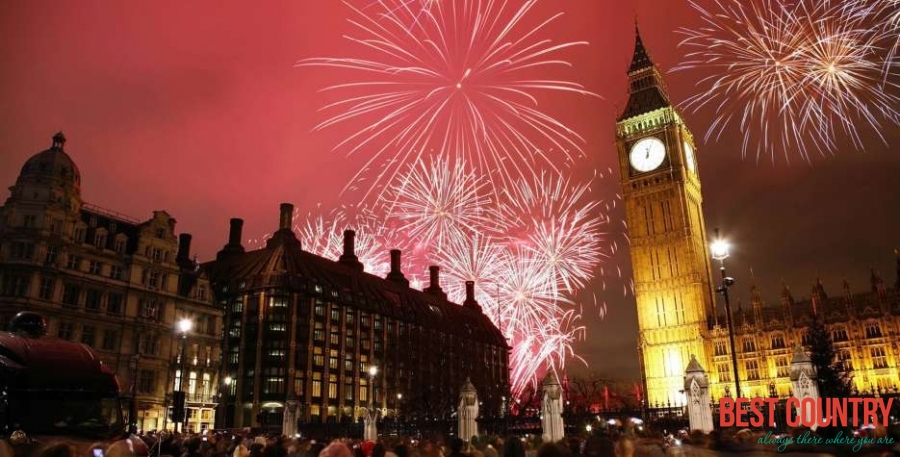 According to the Gregorian calendar, the start of each New Year in Great Britain is on January 1st. January 1st was officially designated as New Year’s Day in 1752. However, other cultures and traditions celebrate it on a completely different day.

For example, in the Eastern Orthodox Church they celebrate New Year on 14th January, which is the 1st January in the Julian calendar.

Hogmanay is the Scot’s word for the last day of the year, 31st December and the partying can last right through to January 2nd, which is a Bank Holiday in Scotland.

Hogmanay has its origins in pagan times, an ancient time when the people would hold festivals for the sun and fire in the middle of the winter, to help them through the cold hard times and to encourage the warmth and the longer days to return in the spring.

A few of these ancient fire rituals have survived into modern times. At Stonehaven in Kincardineshire, one of the local Hogmanay traditions is fireball swinging.

This involves the local people putting together balls made of chicken wire, stuffed with tar, paper and any other flammable materials. The balls can be made up to around a diameter of 61cms and are attached to a 2m long piece of non-flammable rope, twine or a chain.

A ball swinger is chosen; the fireball is lit and carried in procession from Stonehaven harbour to the Sheriff’s court and back, while the swinger swings the ball around their head and body. Any balls that are still alight when they get back to the harbour are cast into the sea.

Again, at Burghead in Moray they practise the ritual of ‘The Burning of the Clavie’. This custom, which was decried in the 18th century as ‘an abominable heathenish practise’, actually takes place on 11th January, which would have been New Year’s Day in Scotland before they changed the calendar in 1660.

The ‘Clavie’ itself is half of a barrel filled with wood shavings and tar nailed onto a carrying post. Traditionally the same nail is used every year.

The ‘Clavie’ is lit from a burning peat from the fire of an old Burghead provost and carried around the town in turns by around ten of the local fishermen. They go around the town in a clockwise direction and stop at the homes of important local people to present a piece of the burning ‘Clavie’ for good luck. The men then take the ‘Clavie’ to an old stone altar at an ancient fort on Dorie Hill.

The ‘Clavie’ is set down and more fuel added until the fire is big enough to act as a beacon on the side of the hill. The locals take burning embers from the ‘Clavie’ to light New Year fires at home, as this was supposed to bring luck during the coming year.

Up until the 1960’s, Hogmanay was a more important festival in Scotland than Christmas. On the day of Hogmanay, 31st December, traditionally the house would be cleaned throughout so that the coming year would be welcomed into a pristine, tidy home.

It is regarded as very bad luck to welcome the Hogmanay into a dirty and untidy house! Fireplaces would be swept out and scoured, and some families would read the ashes of the last fire of the year, to see what the coming year had in store for them. The act of cleaning the house for Hogmanay was known as the ‘Redding’.

The first stroke of the bells ringing in the New Year at midnight was known as The Bells, and this would hopefully bring the first of many ‘First Footers’ to visit the house.

The back door of the house would be opened to let the Old Year out. It is believed that the first male visitor to a home on New Year’s Day brings good luck. Preferably the male visitor would be a young, handsome, dark-haired, healthy male.

The male visitor was supposed to bring gifts of money, bread or cake, coal or salt as these were considered lucky. The bread and cake was to ensure that the household did not go hungry during the coming year, the coal was to ensure that the house would be warm throughout the year and the salt was said to bestow wealth, as salt used to be a rare and precious commodity.

A blond or red-headed man or a woman visiting the house first was a big no-no and was considered to bring bad luck. This is because a dark-haired man in ancient times would have been regarded as a fellow Scotsman, and therefore to be deemed safe, whereas a fair haired or red headed man could have been a Viking and therefore potentially a dangerous enemy.
A British New Year

People in Scotland still go ‘First Footing’ and go around visiting all the houses in the neighbourhood. They probably take a bottle of whisky with them to offer neighbours a New Year dram. In less prosperous times, the bottle would be stored on the mantelpiece and only opened on the stroke of midnight.

In the older times the villagers would drink something called a Het Pint. The Het Pint is a mixture of ale mulled with nutmeg and whisky. This fragrant, warm brew would be served from a copper kettle to any ‘first footer’ encountered during the celebrations.

New Year in Great Britain is also a time to make some resolutions. A New Year Resolution is a commitment to change a habit or engage in a healthier lifestyle.

Typical resolutions include giving up smoking, losing weight, vowing to get fitter or saving money. However, many of these resolutions, made in a flush of alcohol and partying, are not kept for very long and are apt to be repeated year after year!

So whether you go to London for the fireworks display on New Year’s Eve and then watch the parade on New Year’s Day or you are going from home to home with your bottle of whisky in a small Scottish town, you will find many different ways of bringing in the New Year in and around Great Britain – the Celtic Lands.