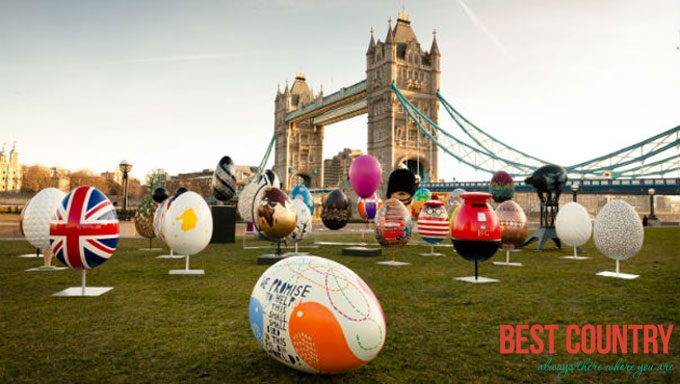 Easter is the most important festival in the Christian church year. It begins with Good Friday. The Romans killed Jesus Christ in Jerusalem about two thousand years ago. Christians believe in the Resurrection of Jesus Christ on the third day after his Crucifixion.

Easter eggs, Easter Rabbit (Easter Bunny) and sending Easter cards are tradition not only in Britain. The cards are often in green or yellow or show baby animals, because lots of animals are born in spring. This tradition goes back to the 19th century.

The Royal Maundy is an ancient ceremony which has its origin in the commandment Christ gave after washing the feet of his disciples on the day before Good Friday.

It seems to have been the custom as early as the thirteenth century for members of the royal family to take part in Maundy ceremonies, to distribute money and gifts, and to recall Christ's simple act of humility by washing the feet of the poor.

Henry IV began the practice of relating the number of recipients of gifts to the sovereign's age, and as it became the custom of the sovereign to perform the ceremony, the event became known as the Royal Maundy.
In the eighteenth century the act of washing the feet of the poor was discontinued and in the nineteenth century money allowances were substituted for the various gifts of food and clothing.

Maundy money as such started in the reign of Charles II with an undated issue of hammered coins in 1662. The coins were a fourpenny, threepenny, twopenny and one penny piece but it was not until 1670 that a dated set of all four coins appeared.

Today's recipients of Royal Maundy, as many elderly men and women as there are years in the sovereign's age, are chosen because of the Christian service they have given to the Church and community.

At the ceremony which takes place annually on Maundy Thursday, the sovereign hands to each recipient two small leather string purses. One, a red purse, contains - in ordinary coinage - money in lieu of food and clothing; the other, a white purse, contains silver Maundy coins consisting of the same number of pence as the years of the sovereign's age.

Maundy money has remained in much the same form since 1670, and the coins used for the Maundy ceremony have traditionally been struck in sterling silver save for the brief interruptions of Henry's Vlll's debasement of the coinage and the general change to 50% silver coins in 1920.

A traditional favourite on Good Friday in England, Hot Cross Buns are a spicy currant or raisin studded yeast bun, topped with a "Cross" of lemon flavoured icing. While Christians have adopted the cake and the symbolism of the cross, it wasn't always so. To Pagans then as now, the cross was symbolic of the sun wheel, which symbolizes perfect balance at the time of the Spring Equinox.

Hot Cross Buns were probably originally used in ceremonies and rituals and the Christian Church attempted to ban the buns, although they proved too popular. Left with no alternative but defeat, the church did the next best thing and "Christianized" the bread with Queen Elizabeth I passing a law which limited the bun's consumption to proper religious ceremonies, such as Christmas, Easter or funerals.

There is a story of a widow whose son was a sailor. He asked his mother to bake him hot cross buns on his return on Good Friday. But he never came back. Every Good Friday his mother made a new bun for him and hoped that he would come back.

She collected all the buns in a net. When she died her old cottage was replaced by a pub - "The Widow's Son" where the buns can be seen today. Every year a sailor adds a new bun to the collection in the net. Sailors from around Britain come to the pub and sing and pray for the widow.

For Christians Easter Sunday is the high point of the year. They celebrate the Resurrection of Jesus Christ.
Easter eggs are important in Britain, too. They are a symbol of rebirth in most cultures. People decorate them with different colours using special techniques.

Children believe that the Easter Rabbit hides the eggs in the garden. Even King Edward I of England made the practice of coloured eggs more famous. He ordered 450 eggs to be coloured for Easter gifts in 1290.

People like to bring home a container of Easter water to be used at home for family blessings on persons, house, etc.

A traditional food is Roast lamb for dinner on Easter Day.

In some areas "egg rolling" is still popular today. People take the eggs to the top of a hill and roll them down. The first egg to get to the foot of that hill is the winner.