London is the capital of Great Britain 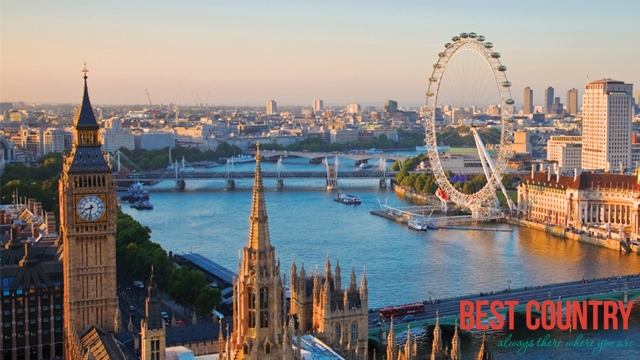 London is a huge city, so all individual listings are in the appropriate district articles and only an overview is presented here.

Buckingham Palace - The official London residence of the Queen, also in Westminster.

The London Eye. The world's third largest observation wheel, situated on the South Bank of the Thames with magnificent views over London.

Marble Arch is a white Carrara marble monument designed by John Nash. It is located in the middle of a huge traffic island at one of the busiest intersections in central London where Oxford St meets Park Lane in Mayfair.

Piccadilly Circus is one of the most photographed sights in London. The status of Eros stands proudly in the middle while the north eastern side is dominated by a huge, iconic neon hoarding.

St Paul's Cathedral, also in the City, is Sir Christopher Wren's great accomplishment, built after the 1666 Great Fire of London - the great dome is still seated in majesty over The City. A section of the dome has such good acoustics that it forms a "Whispering Gallery".

Tower Bridge - Is the iconic 19th century bridge located by the Tower of London near the City.

The Tower of London - Situated just south east of the City, is London's original royal fortress by the Thames. It is over 900 years old, contains the Crown Jewels, guarded by Beefeaters, and is a World Heritage site. It is also considered by many to be the most haunted building in the world.

Trafalgar Square - Home of Nelson's Column and the lions, and once a safe haven for London's pigeons until the recent introduction of hired birds of prey. It recently attracted controversy over the 'Fourth plinth', previously empty, being temporarily home to a Marc Quin sculpture, 'Alison Lapper Pregnant'. Overlooked by the National Gallery, it's the nearest London has to a 'centre', and has recently been pedestrianised.

Westminster Abbey and the Palace of Westminster (including Big Ben and the Houses of Parliament) in Westminster. The seat of the United Kingdom parliament and World Heritage site, as well as setting for royal coronations since 1066, most recently that of Queen Elizabeth II in 1953.

30 St Mary Axe or The Gherkin, a peculiarly-shaped 180m building in the City, which provides a 360° view of London on the 40th floor.

The Shard, a futuristic skyscraper due to be topped-out in 2012, that already dominates the London skyline and will become the tallest building in the EU. When finished this multi-use 310m (1,017ft) tower will feature a viewing deck on the 72nd floor.

London hosts an outstanding collection of world-class museums. Even better, it is the only one of the traditional "alpha world cities" (London, Tokyo, New York City and Paris) in which the majority of the museums have no entrance charges, thus allowing visitors to make multiple visits with ease. Although London can be expensive, many of the best museums and galleries are free including:

and most museums in Greenwich.

Aside from these world famous establishments, there is an almost unbelievable number of minor museums in London covering a very diverse range of subjects. The British government lists over 240 genuine museums in the city.

The 'green lungs' of London are the many parks, great and small, scattered throughout the city including Hyde Park, St James Park and Regent's Park. Most of the larger parks have their origins in royal estates and hunting grounds and are still owned by the Crown, despite their public access.

Hyde Park and adjoining Kensington Gardens make up a huge open space in central London and are very popular for picnics.

Regent's Park is wonderful open park in the northern part of central London.

St James's Park has charming and romantic gardens ideal for picnics and for strolling around. St. James's Park is situated between Buckingham Palace on the west and Horse Guards Parade on the east.

Hampstead Heath is a huge open green space in north central London. Not a tended park a such and is remarkably wild for a metropolitan city location. The views from the Parliament Hill area of the heath south over the city are quite stunning.

Richmond Park also is a huge green space, but has a thriving deer population that is culled in the spring. Excellent place for cycling.

Bushy Park, near to Hampton Court Palace, is the second-largest park in London. More low-key than its larger cousin, Richmond Park, it too has a large deer population. Bushy Park contains numerous ponds, bridleways, two allotments, and at its northern edge, the National Physical Laboratory.