This is a list of rivers (or tributaries thereof) at least partially located in Austria. Nearly all of Austria is drained by the Danube into the Black Sea; the rest flow into the North Sea. 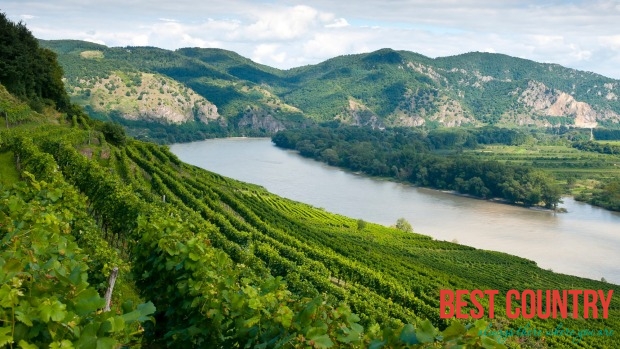 The Danube has its source near Donaueschingen in southwestern Germany and flows through Austria before emptying into the Black Sea. It is the only major European river that flows eastwards, and its importance as an inland waterway has been enhanced by the completion in 1992 of the Rhine-Main-Danube Canal in Bavaria, which connects the Rhine and Main rivers with the Danube and makes barge traffic from the North Sea to the Black Sea possible.

The major rivers north of the watershed of the Austrian Alps (the Inn in Tyrol, the Salzach in Salzburg, and the Enns in Styria and Upper Austria) are direct tributaries of the Danube and flow north into the Danube valley, whereas the rivers south of the watershed in central and eastern Austria (the Gail and Drau rivers in Carinthia and the Mürz and Mur rivers in Styria) flow south into the drainage system of the Drau, which eventually empties into the Danube in Serbia. Consequently, central and eastern Austria are geographically oriented away from the watershed of the Alps: the provinces of Upper Austria and Lower Austria toward the Danube and the provinces of Carinthia and Styria toward the Drau.

A particular sensitive hydrological system to climate change is the lake Neusiedl at the Austrian/Hungarian border. This shallow lake (~ 1,5 m) has no natural drain and its water level is mainly defined by precipitation on the lake and evaporation. Since the formation of the lake about 13,000 years ago it has dried up more than 10 times. The lake totally disappeared from 1740–1742, 1811–1813, and most recently from 1866–1871. Till the beginning of the 20th century, when the Main Regulation Channel (Einserkanal) was built, Lake Neusiedl had no outflow. Since 1965 the sluice gate management via this channel is regulated aimed to prevent flooding.

The observed increase of temperature and also sunshine duration within the last decades enhanced the lake evaporation by 10 % (5) for the period 1991–2004 compared to 1961-1990. Within the last 15 years also a weak decrease of precipitation has been observed (~ 6 %) and the lake level was sinking, leading to some troubles in tourism (sailing).

Assuming a temperature increase of 1.8°C within the next 35 years a further increase of the lake evaporation by 15 % was found. The return period for reaching critical lake levels for sailing has changed from ~ 30 years in 1961-1990 to 12 years in 1991-2004 and in the scenario for 2040 the critical level was reached nearly every third year, assuming no change in yearly precipitation.

Lower water levels might lead to a reduction of touristic and sailing attractiveness, and an increase of nutrient concentrations and enhanced growth of phytoplankton and cyanobacteria. Lake Neusiedl is a famous European bird breeding region and a vanishing of this lake would have important impact on the European fauna. As summer tourism is an important regional economic factor, the possible impact of climate change on lake Neusiedl has a high priority for regional authorities.