Vienna is the capital of Austria

Vienna is the capital of the Republic of Austria and one of the nine states of Austria. It is the 10th-largest city by population in the European Union. Vienna is host to many major international organizations, such as the United Nations and OPEC. 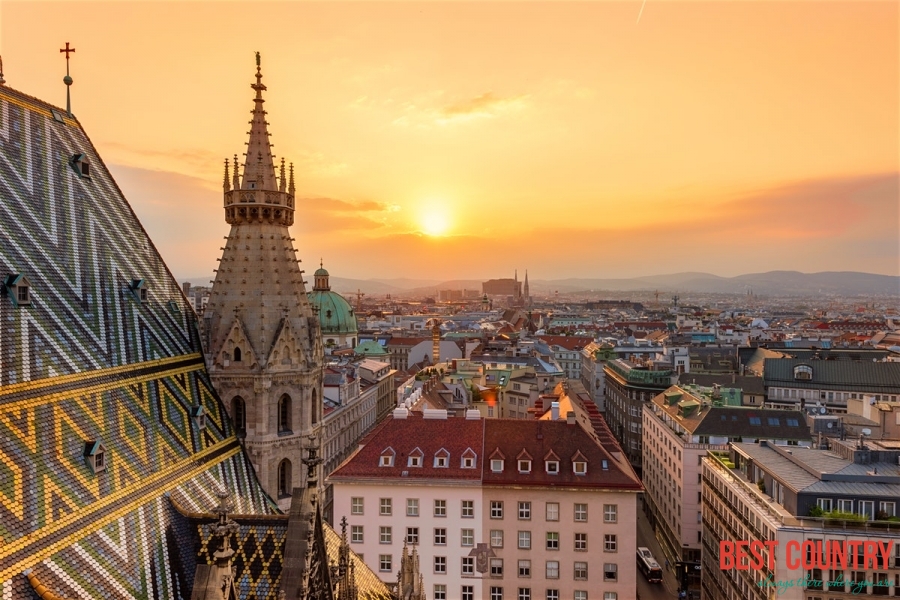 Art and culture have a long tradition in Vienna, including theatre, opera, classical music and fine arts. The Burgtheater is considered one of the best theatres in the German-speaking world alongside its branch, the Akademietheater. The Volkstheater Wien and the Theater in der Josefstadt also enjoy good reputations.

Vienna is also home to a number of opera houses, including the Theater an der Wien, the Staatsoper and the Volksoper, the latter being devoted to the typical Viennese operetta.

A variety of architectural styles can be found in Vienna, such as the Romanesque Ruprechtskirche and the Baroque Karlskirche. Styles range from classicist buildings to modern architecture. Art Nouveau left many architectural traces in Vienna. The Secession, Karlsplatz Stadtbahn Station, and the Kirche am Steinhof by Otto Wagner rank among the best known examples of Art Nouveau in the world.

The Hundertwasserhaus by Friedensreich Hundertwasser, designed to counter the clinical look of modern architecture, is one of Vienna's most popular tourist attractions. Another example of unique architecture is the Wotrubakirche by sculptor Fritz Wotruba. The 202 m-high Millennium Tower located at Handelskai is the highest building in Vienna.

Vienna is the last great capital of the nineteenth century ball. There are over 200 significant balls per year, some featuring as many as nine live orchestras. Balls are held in the many beautiful palaces in Vienna, with the principal venue being the Hofburg Palace at Heldenplatz. While the Opera Ball is the best known internationally of all the Austrian balls, other balls such as the Kaffeesiederball (Cafe Owners Ball), the Jägerball (Hunter's Ball) and the Rudolfina Redoute are almost as well known within Austria and even better appreciated for their cordial atmosphere.

Vienna possesses many park facilities, including the Stadtpark, the Burggarten, the Volksgarten (part of the Hofburg), the Schloßpark at Schloss Belvedere (home to the Vienna Botanic Gardens), the Donaupark, the Schönbrunner Schlosspark, the Prater, the Augarten, the Rathauspark, the Lainzer Tiergarten, the Dehnepark, the Resselpark, the Votivpark, the Kurpark Oberlaa, the Auer-Welsbach-Park and the Türkenschanzpark. Many of Vienna's famous parks include monuments, such as the Stadtpark with its statue of Johann Strauss II, and the gardens of the baroque palace, where the State Treaty was signed. Vienna's principal park is the Prater which is home to the Riesenrad, a Ferris wheel. The imperial Schönbrunn's grounds contain an 18th century park which includes the world's oldest zoo, founded in 1752.