The time from late November to the end of the year has a very special meaning in Austria. Visit Austria's christmas markets, try some Gluehwein and enjoy the spirit of Christmas...

Austria is a fascinating country to visit at any time of the year. But the weeks from late November to the end of the year hold a special meaning and let you become familiar with some of the most beautiful aspects of the country: deeply-rooted folk traditions come alive in colorful, romantic events.

Advent, the period of preparation for the festival honoring the birth of Christ, begins on a Sunday four weeks before Christmas Eve.

This is the day when in living rooms all over the country advent wreaths, woven from evergreen twigs and decorated with ribbons and four candles, are hung or prominently placed. On each of the four Sundays leading up to Christmas, one more candle on the wreath is lit at dinnertime, many families pray, read Christmas stories or sing carols together. 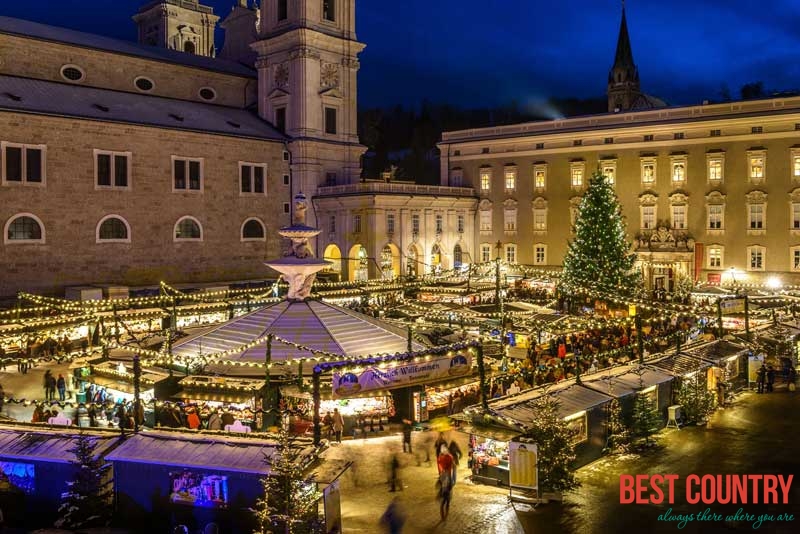 Christmas markets are a long-standing and typically Austrian tradition. In Vienna, for instance, the market is held in the large square in front of City Hall.

This market can be traced back to the year 1298. Innsbruck opens its romantic Christmas market in the narrow medieval square at the foot of the Golden Roof. In Salzburg, the Christmas market takes over the square in front of the Cathedral with its picturesque stalls, while the tree vendors occupy Residenzplatz on the side of the huge Cathedral. However almost every small town has its own Christmas market.

The Christmas tree plays a very important part. Every town sets up its own huge tree on the main square and frequently there will be an extra one, adorned with bread crumbs, for the birds. In families the tree is decorated with gold and silver ornaments or stars made our of straw, sweets and candy wrapped in tinfoil, gilded nuts, etc.

On Christmas Eve shops close at the latest by 6 p.m. and there are no movie or theater performances and no concerts. Most bars, restaurants, night clubs are likewise closed and traffic is almost non-existent.

Presents are placed under the tree and young children believe that they were brought to them -- as a reward for good behavior -- by the Christ Child (Christkind).

Austrian Christmas tradition has it that it is the Christ Child himself (or rather, an eponymous cherubic figure known as the “Christkind”) who decorates the Christmas tree on Christmas Eve and brings the children their Christmas presents, and it is to him that their letters and wish lists are addressed in the weeks before Christmas.