The 31st of December is the day of Saint Sylvester - therefore, Austrians refer to New Years Eve as "Silvester". Salzburg offers a range of attractive activities every year that make it a popular destination for many people who want to have a good time welcoming the new year. 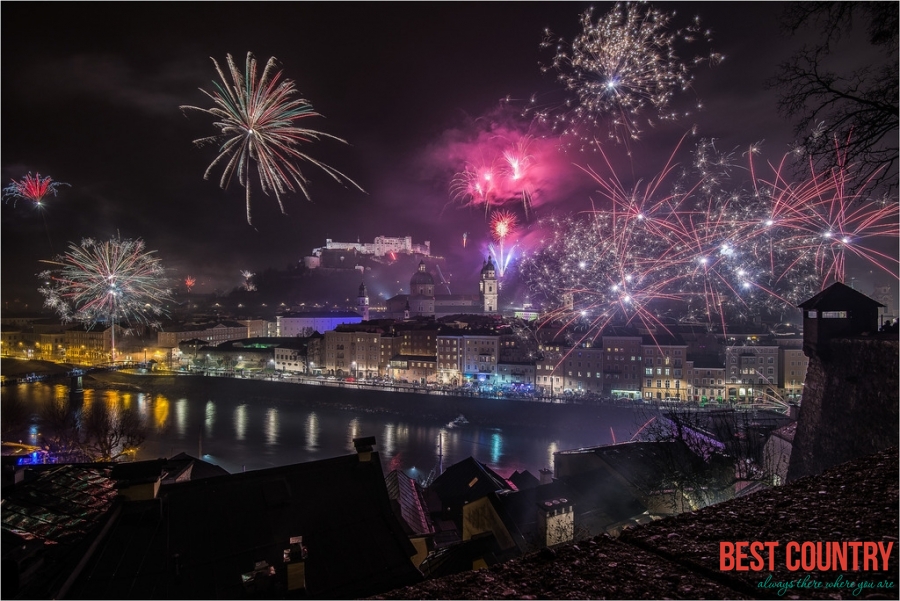 Since most winter tourism is centred in the mountain areas of Southern Salzburg, where the skiing areas are, most visitors on Silvester are coming just for this one day. However, in recent years there is an increasing number of tourists mingling with the locals in Salzburg who come to the city for longer. This is particularly true for Italians, which you will find in vast crowds around New Year's Eve on every corner in Salzburg.

In most years, the city organises concerts in public places in the afternoon. Market stalls open that sell Glühwein (mulled wine) and hot Punsch (tea with rum and orange juice, though recipes might vary) as well as local small snacks. All day long you will hear the loud sound of fire crackers called "Schweizerkracher" (Swiss crackers - though most of them are manufactured in China these days). They seem to be particularly popular with Italians, too, and might be the reason why they come in first place.

Many bars stay open until late, and you will find partying folk in the Rudolfskai area. However, most people will gather around the Domplatz area and on the Kapitelplatz Square, where there is probably live music. Many Austrians will attend private parties that often involve charade or board games and the custom of "Bleigießen".

Bleigießen is a classic New Years tradition, in which people take small pieces of lead in "lucky" shapes - pigs, shamrock, horseshoes - and melt them in a special spoon over a candle. Then they pour the liquid lead in one quick motion into a bowl of cold water.

Thereby, the lead instantly hardens in bizarre shapes. These casts then get held into a lamp and with much cheer and creativity, the participants try to recognise a shape in the shadow.

These shapes should give hints for the future and what the new year will bring - for example, if the shadow of a cast looks like a palm tree, it might mean that the caster will go on a cruise to a tropical country. Of course, interpretations are always a subject of controversy.
Local Traditions & Culture for Silvester

Many high-end restaurants in Salzburg arrange special and very exclusive dinners, sometimes with entertainment - for example, classical concerts or dinner shows. Food in general seems to be a key theme to a great Silvester celebration. Before midnight, people gather outside and wait with bottles of Champaign for the New Year to come.

At midnight, the city launches its official fireworks from the Hohensalzburg Fortress, highlighting the city centre in sparkling colours. It is accompanied by thousands of generally smaller rocket flares, crackers and fireworks that private individuals shoot from their roofs and gardens. Church bells ring and people open the Champaign.

Salzburg′s wilder celebrations peak at the Staatsbrücke. It is closed for cars every year to allow hundreds of people to gather with a good view on the fireworks.

Most Austrians start the New Year by dancing waltz with their loved one. The classic Silvester Waltz is Strauss′ "Donauwalzer" (at the Blue Danube).

The parties continue, often until late - or early, depending on how you read it.

The musical heritage of Austria continues with Silvester traditions: On the first of January, the "New Year′s Concert" (Neujahrskonzert) of the Vienna Philharmonic Orchestra (Wiener Philharmoniker) is transmitted live to millions all over the World - making the program one of the most popular Austrian "TV shows".