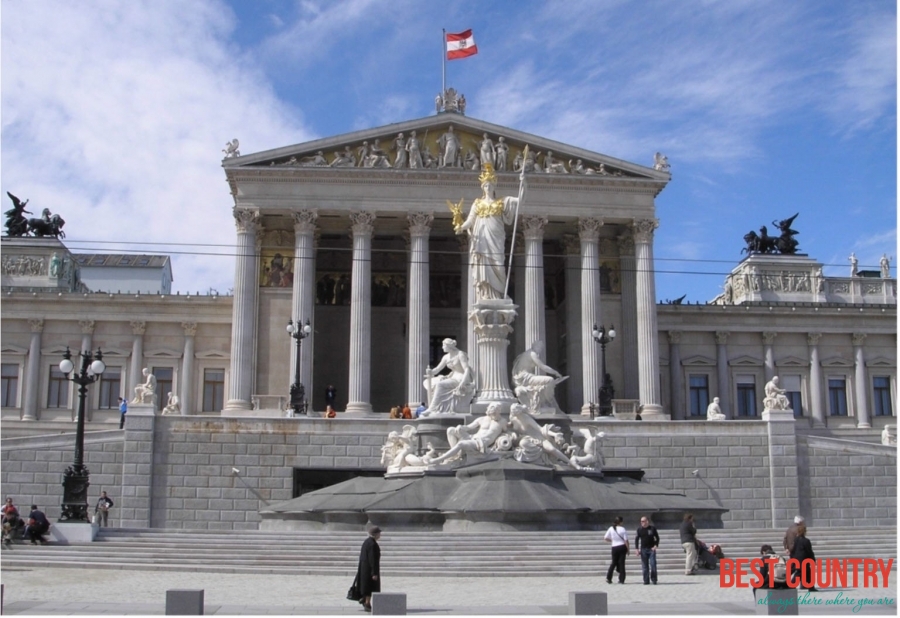 The Politics of Austria take place in a framework of a federal parliamentary representative democratic republic, with a Federal Chancellor as the head of government, and a Federal President as head of state.

Since 1949 the political landscape has been largely dominated by the conservative Austrian People's Party (ÖVP) and the center-left Social Democratic Party of Austria (SPÖ).

The judiciary is independent of the executive and the legislature, and exclusively federal in nature: there are no state courts.

Both the federation and all its states have written constitutions defining them to be republican entities governed according to the principles of representative democracy.

Aside from the fact that the states of Austria lack an independent judiciary on the one hand and that their autonomy is largely notional on the other hand, Austria's government structure is similar to that of much larger federal republics such as Germany.

Austria's head of state is the Federal President (Bundespräsident), elected by popular vote for a term of six years and limited to two consecutive terms of office.

Current president Heinz Fischer was elected for a second term on 25 April 2010. The office of the Federal President is largely ceremonial, although the constitution allows the president to dismiss the cabinet or to dissolve the National Council and call new elections.

The Federal Chancellor (Bundeskanzler) is appointed by the Federal President. Although he is head of government, he has no power to direct other members of the government.

The Parliament of Austria (Parlament) consists of two chambers. The National Council (Nationalrat) has 183 members, elected for a five year term by proportional representation. It is the predominant of the legislature's two chambers.

To be represented in parliament a party needs to either win at least four percent of votes across the nation or win a seat (Direktmandat) in one of the 43 regional constituencies.

The number and distribution of seats is recalculated after each census. The power of the Federal Council is rather limited, since in most cases it has only got a suspensive veto, which can be overruled by the National Council.

However some cases, like laws limiting the competences of the provinces, require the approval of the Federal Council.

The Federal Assembly (Bundesversammlung), which is formed by National Council and Federal Council in joint session, is largely a ceremonial institution, its main responsibility being the swearing in of the Federal President.

It can also call a referendum on the removal of the president from office or bring the president before the Constitutional Court if it concludes that the president violated the constitution, and is ultimately responsible for declaring war.

A convention, the Austrian Convention (Österreich Konvent) was established in 2003 to suggest proposals for a reform of the Austrian constitution and central institutions. It presented a report in 2007, with some of its proposals adopted by parliament.