New Year’s Day, which is on January 1, marks the start of the year in the Gregorian calendar and it's a public holiday in many countries. Count down to the New Year, no matter where you are. 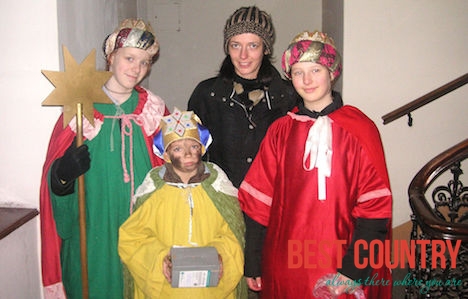 Many Christians around the world annually celebrate Epiphany on January 6. It is a public holiday in many countries and marks two events in Jesus Christ’s life, according to the Christian Bible. The first event was when the three wise men, or kings, visited infant Jesus. The second event was when St John the Baptist baptized Jesus.

January 6, which is 12 days after Christmas in the Gregorian calendar, marks not only the end of the Christmas holidays but also the start of the Carnival season, which climaxes with Mardi Gras. In some European countries, such as the Czech Republic and Slovakia, children dress as the three kings and visit houses. In their roles as the kings, or wise men, they sing about the Jesus’ birth and pay homage to the “king of kings”. They are rewarded with praise and cookies.

Dia de los Reyes Magos is the Latin American celebration of Epiphany. In many Latin American countries, it is the three wise men and not Santa Claus who bring gifts for children. Children write letters to the wise men telling them how good they were and what gifts they want. In France Le Jour des Rois (the Day of Kings), sometimes called the Fête des Rois, is celebrated with parties for children and adults. The galette des rois, or “cake of kings”, highlights these celebrations. This cake is round and flat, cut into the pantry, covered with a white napkin and carried into a dining room.

Children in Spain fill their shoes with straw or grain for the three kings’ horses to eat and place them on balconies or by the front door on Epiphany Eve. The next day they find cookies, sweets or gifts in their place. The “three kings” make an entry in many cities in Spain on Epiphany Eve, accompanied by military bands and drummers in medieval dress.

Palm Sunday commemorates Jesus Christ’s triumphal entry into Jerusalem, according to Christian belief. It marks the beginning of Holy Week and always falls on the Sunday before Easter Sunday. Other names for this day include Passion Sunday, Fig Sunday, Willow Sunday, Branch Sunday, or Blossom Sunday.

Many Christians around the world observe Good Friday on the Friday before Easter Sunday. It commemorates Jesus Christ’s Passion, crucifixion and death, which is told in the Christian bible. It is the day after Maundy Thursday.

Many people in different countries celebrate the anniversary of Jesus Christ’s crucifixion and death on the Friday before Easter Sunday.  This is an observance that involves people fasting and praying. Many church services are held in the afternoon, usually around noon or midday to 3pm, to remember the hours when Jesus hung on the cross. Many churches also observe the day by re-enacting the procession of the cross as in the ritual of the Stations of the Cross, which depicts the final hours of Jesus’ life. Processions are held in many countries such as India, Italy, Malta, the Philippines, and Spain.

Kites that are often handmade are flown in Bermuda on Good Friday to symbolize the cross that Jesus died on, as well as his ascension into heaven. This custom dates back to the 19th century. Churches in countries, such as Belgium and Mexico, are draped in black on Good Friday in memory of Jesus’ suffering on the cross. The day is solemn and a general air of sadness is felt in many towns and villages. Many Christians in Poland fast on dry bread and roasted potatoes. Egg decorating is also part of the Easter preparations in Poland and many other countries.

Easter Sunday is one of the most festive events among Christians worldwide. It commemorates Jesus Christ’s resurrection from death, as written in the Christian bible.

Easter Monday is observed as a public holiday in many countries and is part of the Easter period. It is a Christian observance and is the day after Easter Sunday.

May Day, or Labor Day, is a public holiday in many countries worldwide. It usually occurs around May 1, but the date varies across countries. It is associated the start of spring as well as the celebration of workers.

Ascension Day is the 40th day of Easter. It occurs 39 days after Easter Sunday. It is a Christian holiday that commemorates Jesus Christ's ascension into heaven according to Christian belief.

Pentecost is a Christian holiday commemorating the descent of the Holy Ghost upon the disciples of Jesus Christ, according to the New Testament of the Bible. It is also known as Whitsunday, or Whit Sunday.

Whit Monday, or Pentecost Monday, is a Christian holiday. It is the day after Pentecost, also known as Whit Sunday or Whitsunday, which commemorates the descent of the Holy Ghost upon the disciples of Jesus Christ, according to the New Testament of the Bible.

Corpus Christi is a Christian observance that honors the Holy Eucharist. It is also known as the Feast of the Most Holy Body of Christ, as well as the Day of Wreaths.

Every year on October 26 Austrians celebrate their country's declaration of permanent neutrality after World War II and its regained status as an independent and sovereign nation on October 26, 1955.

On October 26, the Austrian national flag is omnipresent throughout the country. Memorial ceremonies are held in many locations, federal museums offer free entry and some state institutions open for visitors.

A very different tradition on National Day are the “fitness marches” (Fit-Märsche). These are hikes that are organized throughout the country and attract around 100,000 people each year. The aim is to promote fitness and raise awareness of a healthy life-style.

The National Day on October 26 is a public holiday in Austria. Offices, banks, schools and businesses are closed. Public transport runs on a reduced schedule.

October 26 has been the date of Austria's National Day since 1965. Ten years earlier, the country had declared its permanent neutrality, which has since become one of the fundamental values of Austrian foreign policy. One day before the declaration, on October 25, 1955, the last foreign troops left the country, which had been occupied by the four allied powers (Soviet Union, United States, Great Britain and France) since the end of World War II.

All Saints' Day is a celebration of all Christian saints, particularly those who have no special feast days of their own, in many Roman Catholic, Anglican and Protestant churches. In many western churches it is annually held November 1 and in many eastern churches it is celebrated on the first Sunday after Pentecost. It is also known as All Hallows Tide, All-Hallomas, or All Hallows' Day.

All Souls’ Day is a day of alms giving and prayers for the dead. The intent is for the living to assist those in purgatory. Many western churches annually observe All Souls’ Day on November 2 and many eastern churches celebrate it prior to Lent and the day before Pentecost.

The Advent season marks the beginning of the Christian year in western Christianity. Its length varies from 22 to 28 days, beginning on the Sunday nearest St Andrew’s Day and encompassing the next three Sundays, ending on Christmas Day.

Many Christian communities around the world annually observe the Feast of the Immaculate Conception on December 8. This day is a holy day of obligation in which many Christians, particularly of the Catholic faith, attend special church services for this occasion.

Christmas Eve, which is the day before Christmas Day, is celebrated in many countries worldwide. It is a Christian observance that falls on December 24 in the Gregorian calendar.

Christmas Day, on December 25, is one of the most festive Christian holidays in many countries around the world. It celebrates Jesus' birth.

New Year’s Eve is one of the largest global celebrations because it marks the last day of the year in the Gregorian calendar, December 31, before the New Year. Count down to the New Year no matter where you are in the world.