Languages and population of Austria 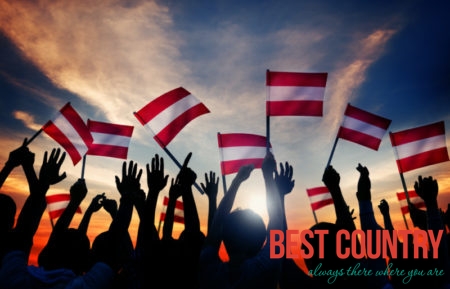 German is the national official language and constitutes a lingua franca and de facto second language: most Austrians other than (mostly rural) seniors are able to speak it. It is the language used in media, in schools, and formal announcements.

The variety of German used, Austrian German is partially influenced by Austro-Bavarian and uses many "Germanized" words and expressions deriving from it.

Alemannic is spoken in Vorarlberg. Vorarlberg uses a High Alemannic, the same dialect group as that spoken in Northern Switzerland (outside Basel) and parts of southern Alsace, France.

It is fairly mutually intelligible with German; however, many Germans find it difficult to understand due to the phonological and grammatical differences.

The main native language of Austria outside Vorarlberg is Austro-Bavarian, which is spoken using many different dialects.

A number of minority languages are spoken in Austria, some of which have official status.

Turkish is the largest minority language, in a situation mirroring that of Germany, spoken by some 2.3% of the population.

Serbian is the second most spoken minority language, with usage by 2.2% of Austrians.

Burgenland Croatian, an official language in Burgenland, is spoken by 2.5% of Austrians, and Burgenland Croats are recognized as a minority and have enjoyed special rights following the Austrian State Treaty (Staatsvertrag) of 1955.

Hungarian-speaking areas in Europe, including a portion of the Austrian province of Burgenland.

While little spoken today, Hungarian has traditionally held an important position in Austria (or, more correctly, Austria-Hungary). Today, Hungarian is spoken by around 20,000 people (.05% of the Austrian population) in Burgenland.

The least spoken of Austria's minority languages, the Bosnian language is spoken by some .04% of the Austrian population.

Slovene, an official language in Carinthia, is spoken by 0.3% of Austrians. Carinthian Slovenes are recognized as a minority and have enjoyed special rights following the Austrian State Treaty (Staatsvertrag) of 1955.

The latest population in Austria is 8,199,783. The gradual increase in the present rate is also a result of the opening of Eastern Europe that had great impact on the size and structure of the Austrian demography .

The total number of people residing alone in Vienna constitutes a major section of the population in Austria. The reason is that most immigrants from eastern and central parts of Europe preferred to settle in this beautiful city in Austria.

Compared to the Austrian capital, the total population strength in other parts of the country does not go beyond 1 million.

Population in Austria is rising fearfully. To give it a proper check, the Austrian government should take sincere initiatives and efforts to stop population influx from other foreign lands that comprise a major part of the country's demography.