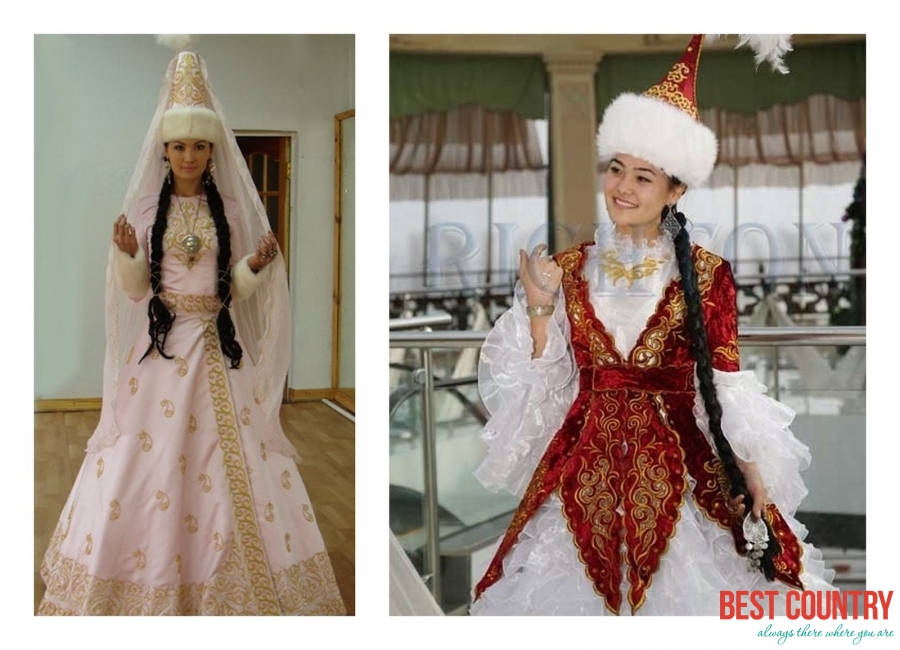 While there are over a hundred ethnicities living in Kazakhstan, this post will only describe the wedding traditions of the Kazakhs themselves.

Modern weddings have shed many elements that were customary before Soviet rule; however, some of them are making a comeback, including the formal marriage proposal (kuda tusu), the bridal payment (kalym), the bride’s farewell (kyz uzatu), revealing the face of the bride (betashar), the wedding and post-wedding ceremonies.

The most favorable time for weddings is autumn, although other seasons will do. Unfavorable times include Ramadan, when Muslims keep fast, and January (according to Kazakh beliefs, a girl who gets married during the coldest month of the year might not get pregnant for a long time).

The formal marriage proposal begins with a delegation from the groom’s parents visiting the house of the bride. The delegation typically consists of five to ten of the family’s most respected relatives.

Wedding arrangements are then made during the wedding ceremony. It is obligatory to pay the kalym (in the past, cattle; nowadays, cash), which the bride’s parents then use to purchase a gift for the newlyweds, such as furniture, home electronics, etc.

The wedding consists of two parts: the bride’s farewell and the official wedding.

The bride’s farewell is an unofficial part of the wedding ceremony. To cut costs, it is usually held at the bride’s home, but richer families may choose to celebrate at a restaurant or café.

The point of the farewell is to gather as many of the bride’s relatives as possible, since the number of the bride’s guests at the official wedding is limited.

After the marriage is legally registered, the groom takes care of the wedding – that is, his family covers all expenses. The number of invited guests is usually 100-300.

Beshtar (ceremonially revealing the bride’s face; or, in the contemporary version, showing the bride to the groom’s relatives and guests) is always accompanied by the traditional zhyr-song.

If you are ever invited to a Kazakh wedding, expect to spend at least six hours at the table (maybe with a short break).

The master of ceremonies walks around, giving relatives and guests the chance to toast the newlyweds. There is no time limit on these, and people may get offended if they don’t get a chance to speak.

After the wedding (usually the next day), the groom’s family hosts a Kelin tea ceremony, in which the new wife serves everyone tea, for which the guests offer her money.

I have listed the most essential wedding customs that have become popular in recent years.

The wedding itself is a huge, costly ordeal; if modern Kazakhs were to celebrate the way their ancestors did, and go through all the necessary rites, many would probably flee their weddings before the end – which is why the new generation tries to revive only a few of them at a time.