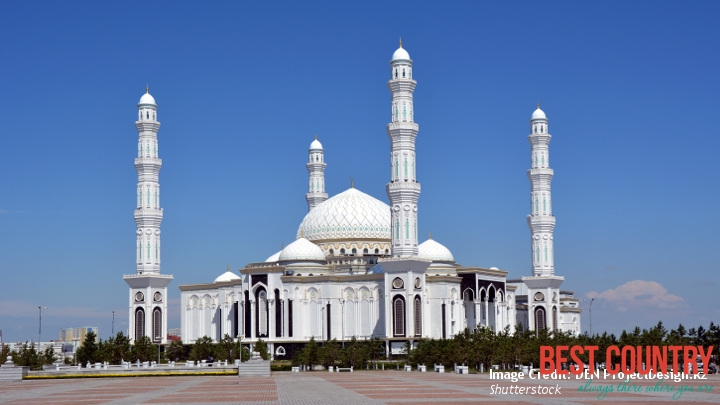 By tradition, Kazakhs are Sunni Muslims of the Hanafi school. The Kazakhs adopted Islam gradually, with complete conversion only in the early 19th century.

The Slavic peoples of Kazakhstan are traditionally Orthodox Christians, and the Russian Orthodox Church is the largest Christian denomination in the republic.

There are few countries in the world today with such a variety of ethnic and religious groups as Kazakhstan.

According to a 2009 national census, approximately 70% of Kazakhstan's population is Muslim.

The majority are Sunni of the Hanafi school, including ethnic Kazakhs, who constitute about 60% the population, as well as by ethnic Uzbeks, Uighurs, and Tatars. Less than 1% are part of the Sunni Shafi`i school (primarily Chechens).

The southern region of the country has the highest concentration of self-identified practicing Muslims. There are a total of 2,300 mosques, all of them are affiliated with the "Spiritual Association of Muslims of Kazakhstan", headed by a supreme mufti. The Eid al-Adha is recognized as a national holiday.

Less than 25% of the population of Kazakhstan is Russian Orthodox, including ethnic Russians, Ukrainians and Belarusians.

Other Christian groups include Roman Catholics and Protestants. There are a total of 265 registered Orthodox churches, 93 Catholic churches, and 543 Protestant churches and prayer houses. The Russian Orthodox Christmas is recognized as a national holiday in Kazakhstan.

Other religious groups include Judaism, the Baha'i Faith, Hare Krishnas, Buddhists, and The Church of Jesus Christ of Latter-day Saints.

As elsewhere in the newly independent Central Asian states, the subject of Islam's role in everyday life, and especially in politics, is a delicate one in Kazakhstan.