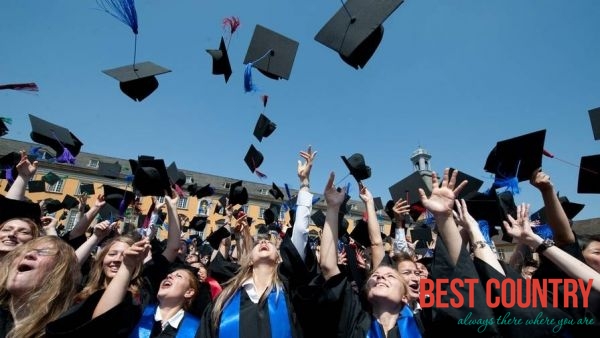 Following independence from the Soviet Union a major economic depression cut "public financing" for education in Kazakhstan, "which dropped from 6% of gross domestic product in 1991 to about 3% in 1994, before rising to 4% in 1999."

Elementary- and secondary-school teachers remain badly underpaid; in 1993 more than 30,000 teachers (or about one-seventh of the 1990 teaching staff) left education, many of them to seek more lucrative employment.

In 1992 about 51 percent of eligible children were attending some 8,500 preschools in Kazakhstan.

In 1994 some 272,100 students were enrolled in the republic's sixty-one institutes of higher learning. Fifty-four percent of the students were Kazakh, and 31 percent were Russian.

Private education is increasing in the country, with about 5% of students enrolled in the private schools that remain largely under arbitrary state control.

In 2000, the Government of Kazakhstan joined the governments of the Kyrgyz Republic and Tajikistan, and the Aga Khan to establish the world’s first internationally chartered institution of higher education, the University of Central Asia (UCA).

The UCA will have three campuses of equal size and stature in each of the founding countries. The Kazakh campus is under construction in Tekeli in the Zhedysu region, 35 minutes east of the regional capital Taldykorgan, and three hours by car from Almaty.

The UCA will benefit from the resources of the Aga Khan Development Network to offer an internationally recognized standard of higher education in Central Asia.

Currently, the University operates a School of Professional and Continuing Education (SPCE), with a School of Undergraduate Studies and a Graduate School of Development in the process of being established.

In 2002 Asian Development Bank provided technical assistance to Kazakhstan to identify key issues and priorities in the education sector and to contribute to strengthening the government's education sector development strategy. The United States provided 137 Peace Corps members to "work in education and NGO development" in 2004.

When United States Secretary of State Condoleezza Rice visited Kazakhstan from 12–13 October 2006, she said "The future of any state depends on its level of education.

This is my fourth visit to Kazakhstan, I have already been to Atyrau and Almaty and I have been able to see for myself the high level of education of your nation, which is a key to success of any country."

The Constitution of the Republic of Kazakhstan protects the right to access to kindergarten Children typically start kindergarten at age 5. As of 2004, there were 100 kindergartens in the nation (83 public, 4 directly under the Ministry of Education, and 13 private) and 135 856 children enrolled in kindergartens (or 63% of the total number of 5-year and 6-year olds in the nation).

All kindergartens are currently expected to teach both Kazakh and Russian, and most emphasize one language over the other.

One major problem has been the reduction of the number of kindergartens, due to the lack of state funding and virtually non-existence of private sources of money. There are also reported declines in the quality of kindergartens including a lack of hot meal or low quality food served, and buildings in poor repair.

Primary school in Kazakhstan starts at age 6 and runs from years 1 – 5. Classes typically run in two sessions, from 8 until 1 and from 1 until 5, with students either going to class in the morning or in the afternoon. All primary schools are state-owned and primary and secondary education are constitutionally protected rights.4 The curriculum includes x, y and z.

The curriculum for both primary and secondary school is established by the Ministry of Education, with little choice left up to the individual schools. Textbooks are given by government in the schools to the students.

Primary school is provided free to all citizens and residents of Kazakhstan and parents typically pay only for extra-curricular activities such as sports programs, music programs, and sometimes lab equipment or other special equipment.

Students continue in lower secondary school from grade 5 to year 9. This roughly corresponds to what is called in the USA, junior high school, or middle school. Typically a student in year 8 is 14–15 years old.

The curriculum is a general education curriculum covering subjects like literature, student's first language, Russian or Kazakh language (depending on the language of the school in general), history, physics, mathematics, biology, chemistry, foreign language, and so on.

Once leaving lower secondary school, there are three tracks available. Students are free to choose any track of higher secondary education but are required to pursue one track. Graduates of all three tracks are eligible to enter university.

The first track is a general secondary school which covers grades 10 -11 and provides general education covering a variety of subjects.

Initial training schools are designed to train students in a skilled profession. The program is usually two or three years, (typically ages 16 – 18), but for some professional training four-year programs are required. Students who graduate can go on to Colleges for advanced vocational training or attend university. The state provides costs of education from the budget.

Accelerated programs exist for students who have already completed both general secondary education and initial vocational training in the same field. Graduates may go on to university or may begin working. As of the 1999 Budget Law being passed, colleges are state-owned and self-financed. In principle however, all compulsory education (primary and secondary) is provided free of charge.

The curriculum for both primary and secondary school is established by the Ministry of Education, with little choice left up to the individual schools. Textbooks are sold in bookstores throughout the country and are purchased by the students themselves.

Like primary school, secondary school is subsidized by the government and parents only pay for extra-curricular activities such as sports programs, music programs, and sometimes lab equipment or other special equipment.

The universities, following the Russian system, focus entirely on teaching and do not engage in research. Students who are accepted to university at any level apply under a specific major, and the curriculum is set by the university (according to State legislation) for each major.

For example, economics majors will all study in the same courses in the same order, separate from English majors who have a different curriculum. Some courses are required for a variety of majors and there is a possibility of switching majors but typically classes do not transfer to the new major and the student is expected to reenter in the new major as a first year.

The government is currently pursuing a program to adopt a credit-system which would allow students to study more easily internationally, and to add the possibility of a curriculum with electives and student-chosen courses.

There are four levels of tertiary education in Kazakhstan:

Universities are usually headed by a rector, appointed by the President of Kazakhstan, who wields considerable authority over the institution, approving all decisions including those regarding curriculum, personnel, and admission. Thus Kazakhstan universities are more centralized than their Western counterparts.

In addition, there are a few international universities such as KIMEP, which is a joint program, 40% owned by the government of Kazakhstan, but education is based on the Western system.

The Kazakh-British Technical University and the Kazakh-American University represent joint projects between Kazakhstan and the UK and the USA, respectively. In all three institutions, the language of instruction is English.

The University of Central Asia, founded jointly by the Governments of Kazakhstan, Kyrgyzstan and Tajikistan and by the Aga Khan, is affiliated with the Aga Khan Development Network. Its Kazakhstan campus is located in Tekeli. A number of specialty universities also exist. As of, there were public universities and private universities.

Private universities, typically for-profit institutions, are subject to the same regulations regarding curriculum but are free to set tuition and salaries as they see fit.

Public universities are subject to the same regulations as other government-owned organs, regarding not only fees and salaries, but also administrative structure, contracting and subcontracting, and ownership of property.

State owned universities receive funding if their enrollment reaches 86,000 students or 34%. A small number of universities are financed through a budget line in the Republic budget, such as art academies or international universities.

Students who have not received general upper secondary education have the academic portion of their program financed by the state.

As for the vocational track, some students pay fees and others are financed through the state order program, where state authorities request a certain number of trained workers and specialists in certain fields. These students are chosen through a merit-based competition based on grades and recommendations from teachers or public officials.

Education for the nation as a whole made up