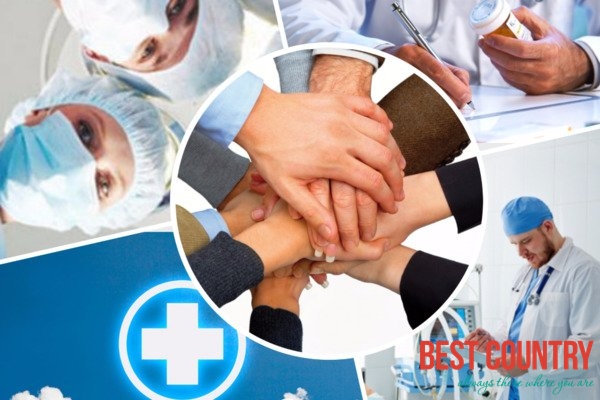 Government is the principal customer of medicines on the market. 70 billion tenge were given for medicines purchasing from the Republican budget in 2009. In comparison with 2008, total purchase amount was 55 billion tenge.

1054 hospitals and 3720 short-stay clinics operate in the Republic. The number of medical organizations increased in 7 regions of Kazakhstan. State authorities forecast that hospital accommodation capacity will reach 120 000.

Following its appointment as a WTO member, Kazakhstan has brought its local medical regulations in line with international standards.

The Kazakhstan Legislation Institute has just completed a draft of the Kazakhstan Healthcare Code which came into force from the 1st of January 2009.

Program of reforming and development of public health

This program was approved by the Government of the Republic of Kazakhstan and its main measures are:

by 2010 public health expenditure will increase to 4% GDP

In message to the people of Kazakhstan, the President of the Republic assigned to Government to launch a programme of «Building a hundred medical facilities on the base of state-private partnership».

This project includes 103 objects and its realization is planned in the course of 3 years. In whole over a 70 billion tenge were built into the budget for construction and renewal of public health projects in 2009.

45 billion tenge were provided for «A hundred medical facilities» Programme. 7 projects were completed in 2008, 18 projects are planning to complete in 2009, 78 projects will put into operation in 2010-2011.

The Vice-Minister of Public Health, Elzhan Birtanov announced that construction of 46 hospitals, 36 clinics, 9 blood centers, 4 TB dispensaries, 3 maternity hospitals is bringing into effect within the bounds of «A hundred medical facilities» Programme. 248 billion tenge were provided for the Programme implementing in 2010-2011.

Unitary system of medicine distribution project is put into operation in 2009 and it makes possible to reduce medicine costs and buy it directly to producer. By 2012 it is planning to create an effective infrastructure and give attention to the transport and logistic system development.

The medical equipment market in Kazakhstan has increased rapidly in size over the last few years. Nevertheless, the market still strongly depends on the import of medical equipment, which makes up 90 % of its total capacity.

According to industry analysts, the high-priority sectors for investment within the sphere of medical equipment are: