Land and Resources, Rivers and Lakes of Kazakhstan

Kazakhstan contains an extensive network of rivers and several large lakes. Many of Kazakhstan’s rivers drain within the republic, although the Ishim, Irtysh, and Tobol rivers flow north into Russia and eventually drain into the Arctic Ocean. Due to dry weather conditions, the riverbeds of most of the republic’s small and medium-sized rivers remain dry for much of the year. 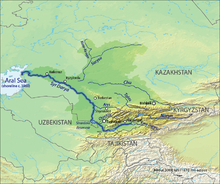 One of Kazakhstan’s largest rivers, the Syr Darya, enters Kazakhstan in the south and follows a northwesterly course toward the northern portion of the Aral Sea, a saltwater lake that straddles Kazakhstan’s border with Uzbekistan.

The Ural River, which flows south from Russia, enters northwestern Kazakhstan and drains into the Caspian Sea, a saltwater lake that is the largest inland body of water in the world.

The Caspian borders five countries and delineates roughly half of Kazakhstan’s western border.

Another large river, the Ili, enters Kazakhstan from China and drains into Lake Balqash, a large lake in the eastern part of the country.

A dam that was completed on the Ili in 1970 has reduced inflow to Lake Balqash, causing the lake’s surface level to lower.

Other large lakes in Kazakhstan include the freshwater lake Zaysan and the saltwater lakes Alakol and Tengiz.