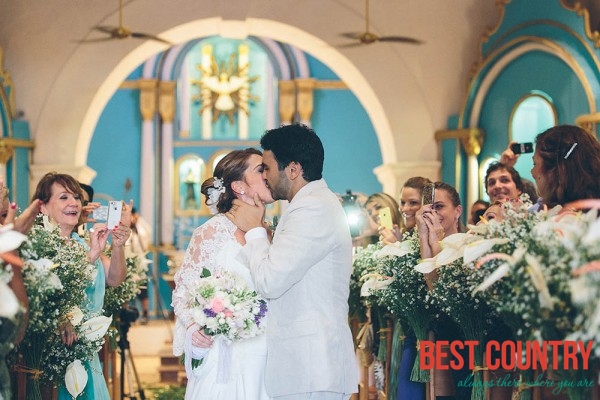 Known and admired the world over for their flamboyant, larger than life, joie-de-vivre culture, a wedding in Brazil brings no less than you’d expect from moving traditions which reflect the Brazilian’s great love of family, to ancient customs which reflect a rich heritage of superstition, excitement and extravagance!

Most modern weddings can take place against stunning Brazilian landmarks and backdrops and readily incorporate all that’s best from Christian and Catholic wedding traditions and Brazilian culture.

In a Brazilian betrothal, an engagement ring is not an important factor because, once betrothed, the couple actually exchange wedding rings. Like couples in Argentina, the affianced couple wear these rings on their right hands until the time of the wedding ceremony.

Although in many other cultures, such as weddings in the USA, the groom chooses his groomsmen long before the event of the wedding, one Brazilian tradition is for the groom to choose his men on the day and his best man even at the very hour of the wedding. Alternatively, it may also be custom for couples is to choose three couples, ie: three males and three females who may / or may not be in relationships with each other. The important thing is that they are long-standing friends and mentors of the bride and groom.

Other pre-wedding customs include the Brazilian version of the bridal shower, known as the “kitchen shower”. This has always tended to be a female gathering, where the bride’s friends and female relations gather for a good old catch up, but a modern twist is that often male relatives may also come along. The idea is that everyone brings along gifts which the bride will be able to use in her new kitchen.

Brazilian weddings are known to be pretty expensive. The old tradition was for the wedding ceremony and party to be paid for by the bride’s family, but over recent years this practice has changed considerably and now mostly involves the bride and groom (with the groom particularly) coughing up for most of the wedding expenses.

Although both families will be involved in preparations, right up until the last minute, it is customary for the bride and her family to take the day before the wedding completely off and spend this being pampered and prepared for the wedding at a local spa.

Like English couples, it’s considered very unlucky for the Brazilian bride and groom to see each other before the wedding ceremony. The groom is expected to arrive first and it’s customary (and lucky) for the bride to be at least 10 minutes late for her nuptials – although in some areas it’s quite acceptable for her to be up to 2 hours late (although nail-biting for the groom and frustrating for the assembled guests)!

The majority of Brazilians follow the Roman Catholic faith and many Catholic and Christian traditions are followed as a part of a church service:

The bride enters the church or ceremony venue accompanied by two flower girls. One will scatter flowers as the bride processes to the altar, whilst the other “flower girl” will be the bearer of the wedding rings.

Both bride and groom will recite their vows to each other after prayer readings.

The clergyman will bless the couples wedding rings, which will then be placed onto their left hands, reflecting their changed status from betrothed to married.

As with the marriage rites of many cultures, the couple are called upon to seal the deal with a kiss, which is the symbolic point at which the couple are publicly declared to be married.

The customary signing of the register takes place as part of the marriage rights, with the witnesses as well as the bride and groom being called to sign the legal document which solemnizes and bears witness to the marriage in the eyes of the law,

Most wedding ceremonies take approximately an hour – but this may depend on whether there have been any extra personalizations such as readings, poems and dedications.

Some Brazilian churches actually have enough space (and many offer it up) to be used for the whole wedding reception, although the usual custom is that after their marriage ceremony, the couple and their guests repair to a separate venue to start their loud and proud Brazilian celebrations!

The Brazilian Wedding Reception ~ making a night of it!

Brazilian wedding receptions are known as “ceremonials” and typically involve the newly joined families feasting and drinking together, along with the newlyweds and their friends. Like British couples, Brazilian newlyweds often present gifts to their parents in the course of the reception toasts and it’s customary for their parents to reciprocate.

Many parties include speeches and toasts from many members of either family as well as guests who might like to speak. The party later involves singing, dancing and celebrations which have a truly festive “carnival” feel, where all guests can really pay their respects and pass on blessings to the couple by demonstrating happiness and having the best possible time!

The nature of the events, from feasting to festivities will be influenced by many factors, including the area of Brazil as well as whether its an urban or more rural wedding, as well as of course by cost. In more rural areas, countryside weddings include many traditions such as for a farmer in the family to barbeque at least 2 cows as a contribution to the wedding feast.

There are a few wedding games played out during the party, such as the groom’s tie being sought as an item of value and good luck by the guests. It’s usually the best man’s job to liberate the tie and then cut it up and sell the pieces to the guests as lucky mementos!

Instead of wedding “favors” as are traditionally understood in the USA and Europe, the Brazilian custom is to give the gift of a special sweet to guests as they leave. This sweet is a special, traditional recipe, known as bem casado (“well married”). Distributed as a good-bye thank you to their guests, the sweets are thought to being luck to the couple.

The bride and groom are very likely to follow US traditions in respect of bridal wear. The bride may or may not decide to wear a wedding gown of white although white is the traditional color. It’s also customary for her to wear gold shoes.

It’s custom for bridal attendants to choose their own gowns, but unlike other cultures where the tradition is for the bridesmaids to wear matching gowns, the old Brazilian idea is than no color should be repeated, ie: no 2 blue gowns. It’s easy to see that a full rainbow of bridal attendants really adds to the color and excitement of a Brazilian wedding day, and makes for an eye-catching entourage!

In some parts of Brazil, a groom might still be expected to prove his worth prior to the wedding with the ancient custom of numba-meu-boi, where he’s required to tame a donkey! Showing himself capable in this way demonstrates that he’s a capable provider for his wife. Hmmm, the alternative, I guess, is that he just makes an ass of himself!

It’s customary for the bride and groom to have each other’s names engraved on their wedding rings.

As well as the game with the groom’s tie to raise some honeymoon cash, many Brazilian brides still follow the tradition of taking off her gold shoes at some point in the evening and placing them in the middle of the dance floor. As the guests dance around them, they drop money into the shoes to show their support of the couple’s financial future.