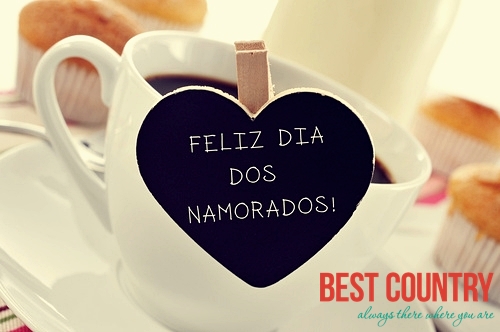 Straggling across half of South America, Brazil has captivated travelers for at least 500 years. It is the largest country and the only Portuguese-speaking country in Latin America. It has a history of being a colony of Portugal from the landing of Pedro Alvares Cabral in 1500 until its independence in 1822. Now, Brazil is a federal republic which is world's tenth largest economy by nominal GDP and the ninth largest by purchasing power parity. In 1950, Joao Doria, a famous Brazilian advertiser , made an advertisement with the following slogan "It's not just on kisses that you prove your love" and thus, is the way Brazilian celebrate Valentine's day. It's considered as a day for lovers to exchange gifts, cards and prove their love in various ways.

The exotic location called Brazil has a diversity of wildlife, natural environment and extensive natural resources. The Brazilians celebrate the Valentine's Day in a very big way. Unlike in the United States or any other countries, Brazil does not celebrate Valentine's Day on the 14th of February because it usually falls close to the Brazilian Carnival. They celebrate the Dia dos Namorados (Day of the Enamored) on June 12th. It has a diversified, colorful culture which has influenced the whole Latin American culture in some ways. In Brazilian language, Valentine's Day is called as 'the Dia dos Namorados' which means 'Day of the enamored' or boyfriends'/girlfriends' day.

In Brazil, the Dia dos Namorados is celebrated on June 12, which is Saint Anthony's Day Eve. Saint Anthony is recognized for blessing young couples with happy and prosperous marriages. Celebrations for 'Dia dos Namorados' in Brazil and those for Valentine's Day in most other countries are similar. Typically, couples exchange romantic gifts, such as chocolates or flowers, and they may also share a "date night". Shoppings, malls and (specially) hotels usually make big sales for this day and special promotions.