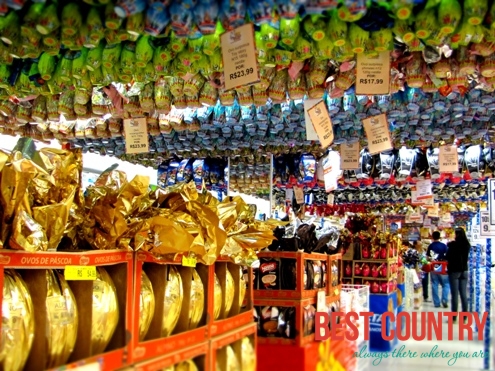 Easter is an important Christian festival, celebrated in different ways all over the world. The traditions seen in the US would vary with those seen in the interiors of Africa or the Asian continent. Being the largest and the most populous country in South America, Brazil grabs special attention during the festive season of Easter.

Brazil celebrates the festival in autumn, because of its geographical location - majority of the parts of the country are located in the Southern Hemisphere, where spring season is from September to November. The celebrations of the festival in the country are marked by colorful traditions and customs. Go through the following lines to know all about the traditions and celebrations of Easter in Brazil.

Easter celebration in Brazil begins with the Holy Week rituals, which involve the blessing of the palm branches, woven in intricate patterns representing crosses, banners, letters and other related objects. Like in many other countries, worshippers in Brazil take out procession walks, carrying statues of Mary and the body of Lord Jesus Christ. 'Pacoca', a special Easter delicacy prepared by mixing crushed nuts (preferably peanuts) and other ingredients including sugar to form a paste, is given to the visitors.

The world-famous Rio Carnival in Rio de Janeiro precedes the Easter celebration in Brazil. The Carnival takes place during the days, preceding 'Ash Wednesday', the first of 40 days of the Lent season. 'Sambodromo', a 700-meter long parade strip, is thronged by a huge crowd comprising of locals and tourists. On the last Sunday and Monday nights before Lent, the enchanted onlookers cheer up the Samba dance troupes, participating in the jamboree.

Other towns and cities in Brazil, such as Recife, also have celebrations during the Carnival period, that are well known for their folkloric representations and two well known folk dances - the Maracatu and the Frevo. As the Easter day approaches, people would keep themselves busy in the preparations for the festival. The streets are filled with shops and stalls raised especially for selling special Easter bunnies, on discounts. On Easter day, gala carnivals are organized everywhere throughout the country, to commemorate the Resurrection of Lord Jesus Christ.

Worshipping the popular symbols of Easter is a popular custom in Brazil. Macela flower, which blooms only in the lent, is worshipped by the devotees of Lord Jesus Christ, in the country. On Palm Sunday, people would bring the flower to the church service, as to receive the blessings of the priest. The flower is later on used as a herb, which is believed to cure many diseases. Thereafter, mouthwatering dishes are served. Traditionally, the recipes typical to the country are prepared on Easter. These include 'clipfish', chocolate Easter eggs and the lip smacking Easter ring cake.