Brasilia is the capital of Brazil 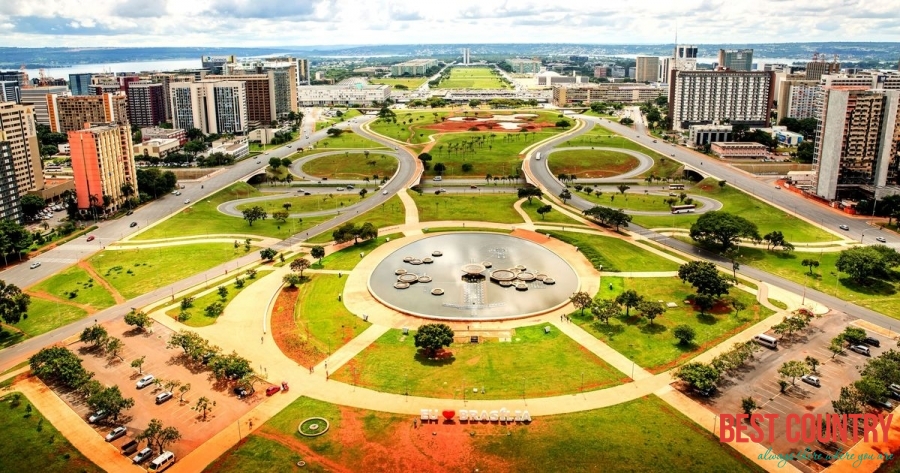 Brasilia is the capital of Brazil. The city and its District are located in the Central-West region of the country, along a plateau known as Planalto Central.

Nearly all of Brasilia's architectural sites are on the eastern part of the Monumental Axis.

The Three Powers Square (Praça dos Três Poderes) at the extreme end of the axis includes the seats of the country's 3 highest authorities: the Congress, the Presidential Palace (called Palácio do Planalto) and the Supreme Court.

Itamaraty Palace which houses the Ministry of Foreign Affairs, also stands out among the ministry buildings at Esplanada dos Ministérios.

Brasilia Cathedral is midway along the axis. With its sixteen curved 90-ton concrete pillars and stained-glass panels, is one of the world's most amazing modernist buildings.

Television Tower - In the middle of the Monumental axis, It's the best place for a sweeping panorama of the city.

The Juscelino Kubitschek Memorial on the western part of the axis is a museum dedicated to the life and accomplishments of the president, and houses his remains as well. It's located underground and has a slightly spooky 1960's science-fiction feel to it.

Palácio da Alvorada (Palace of Dawn) - The President's official residence. Its arches are icons of the capital.

Public works of art - Some of the finest Brazilian artists have created works in Brasilia: Burle Marx (landscape design), Athos Bulcão (geometric tile panels), Oscar Niemeyer (buildings and sculptures) Ceschiatti and Bruno Giorgio (sculptures). These can be seen on the streets, open air and for free.

Dom Bosco Church. A beautiful modern church built on concrete and blue stained glass. Bosco was a 19th-century Italian priest whose writings, some say, prophesied the creation of Brasilia. It's impossible not to notice the huge crystal chandelier hanging from the ceiling in the middle of the square church.

Besides the outstanding architecture and art, Brasilia also has attractions on the natural side:

Paranoá Lake - an excellent place to watch Brasilia's famous sunsets. You can swim in the lake at the Ecological Park next to the Ermida.
City Park (Parque da Cidade) - Slightly larger than NYC's Central Park, this wide green area is the city's hot spot for sports such as jogging, cycling, skating and even kart racing, as well as barbecues and other outdoor activities.

Brasilia National Park - Cerrado vegetation and fauna, plus natural swimming pools.
Poço Azul - A waterfall forming beautiful blue pools on a quartz rock.
Parque Olhos D'Água - It has many springs, streams and a small pond. Many of its facilities include a playground and two outdoor gyms.

Brasilia National Museum - Monumental axis. Near the Brasilia Cathedral. Brasilia's newest museum was built to be the city's home for renowned national and international exhibitions.

Espaço Cultural Contemporâneo (ECCO) - A gallery that has many works of contemporary art. Mostly sculpture and paintings.

Monetary Museum - Maintained by the Central Bank of Brazil, it has everything related to money: rare coins, paper money from various countries, medals, gold bars, old machinery used to print and cut etc. It also keeps the biggest gold nugget ever found in Brazil, weighing 60.8kg.