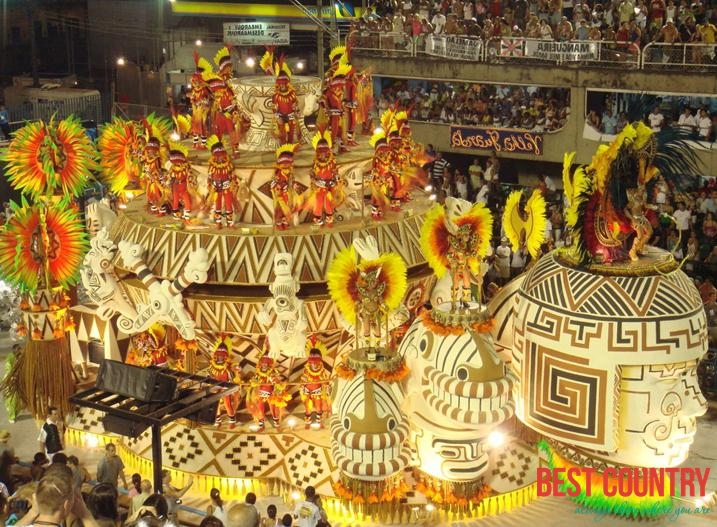 Brazil's Events and Holidays include:

New Year's Day is known as Ano Nove (Portuguese) locally, but is probably more famously known as Revillon. Whilst the whole country celebrates New Year's Day, as with most major festivals in Brazil, the place to be on New Year's Day is Rio de Janeiro - where anywhere up to 2 million people gather to revel in an all night / all day party. If you want to join in the fun and frolics of Rio on New Year's Eve, take yourself off to Copacabana beach where you can join in with some of the best fireworks and live music in South America!

Carnival Rio takes place during the 5 day up to Ash Wednesday, with the last day of Carnival falling on Shrove Tuesday. Although the most famous events during the 5 days of Carnival are the Rio Carnival, events celebrating Carnival take place all over the country. Visitors to Brazil should keep in mind that all 5 days of Rio Carnival are public holidays all over Brazil - therefore most shops will be closed during the period covering Carnival Rio. Traditionally, this is also the culmination of the Brazilian summer holidays and Carnival Rio also marks the end of the long school holidays (which start in December). As a result, travel during Rio Carnival time can be difficult. Sao Paulo also has a big carnival festival of its own, and Sao Paulo carnival images show the same kinds of samba and festivities as the Rio carnival.

As a predominately Roman Catholic nation, Good Friday is a national holiday in Brazil.

Easter Sunday, following Good Friday is a holiday in Brazil; but Easter Monday is not.

Tiradentes Day in Brazil commemorates the execution of Brazilian national hero Joaquim Jose da Silva Xavier - a co-conspirator in the 1789 revolt against the Portuguese. If you are wondering how this holiday gets its name, "tiradentes" means "tooth-puller", and Xavier was a dentist by trade.

As with elsewhere in the world, Labor Day is celebrated in Brazil on May 1, and is one of the national holidays in Brazil.

Another of the Brazilian holidays signifying its close association with the Roman Catholic Church.

Dom Pedro officially declared Brazil's independence from Portugal on this day in 1822.

Our Lady of Aperecida Day (October 12)

Nossa Senhora de Aperecida is the patron saint of Brazil and this national holiday in Brazil is dedicated to her.

As with other traditional Roman Catholic countries, All Souls' Day is a public holiday in Brazil.

Almost ironically, Republic Day is celebrated in Brazil to commemorate the day in 1889 when Dom Pedro - he of Independence Day - was removed from power.

Other important events and holidays in Brazil include:

Washing of the Steps of Bonfim Church (3rd Thursday in January)

In a deeply religious country, this Brazil event constitutes one of the most significant events in the Brazilian calendar. The event itself occurs in Salvador and comprises of hundreds of women in traditional Bahian dress carrying perfumed water to wash the church's steps. Careful though, this event can attract up to 800,000 onlookers!

As with all festivals held in Rio - another spectacular occasion.

The city of Sao Paulo is Brazil's largest and over 20 million people celebrate this day!

Commemorates the day in 1500 on which Brazil is said to have been discovered by Pedro Alvarez Cabral.

Anyone who is familiar with Valentine's Day will know this festival. Exactly the same concept - just a different date.