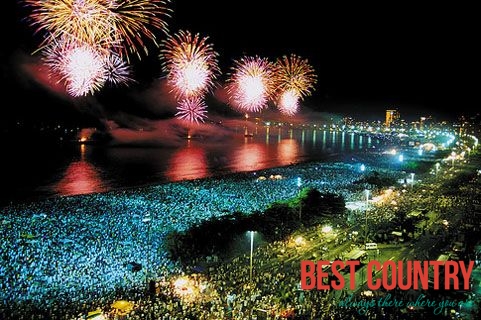 Brazilian New Year is one of the most traditionally celebrated festival for the people living there. New Year in Brazil is known as Ano Nove (Portuguese) but is more popularly known as Revillion. It is celebrated on January 1 as per the Gregorian Calendar.

New Year is the time when people from various parts of the world like to celebrate it in Brazil. Pubs, party halls, clubs, beaches and even roads are thronged with people.

New Year's celebrations in Brazil reflects it's culture and tradition. On the New Year's day, it's a tradition to consume lentils and rice. It is believed to bring in prosperity and good fortune in the coming year.

People dressed in white offer flowers and gifts to the Iemanja, the Goddess of the Water in the Brazilian Umbanda religion. The colorful floating candles gives a splendid view at the time of New Year.

This festival is celebrated with much devotion and sincerity by the fishermen of the city. They believe the catch at the time reflects the catch for rest of the year.

Another feature of New Year's celebrations is the Brazilian Carnival. People dress up in gaudy clothes and walk down streets singing and dancing on beats of various traditional songs. The famous samba get people on their feet every year.

Last but not least, dinner is the best part of Brazilian New Year's Celebrations. It includes farofa (tapioca grains flavored with spices), salads, rice, chicken and marajucá mousse (fruit) which is relished by people present in Brazil to have the taste of it's culture.