Brazil is a federation composed of 26 States, one Federal district (which contains the capital city, Brasília) and Municipalities. States have autonomous administrations, collect their own taxes and receive a share of taxes collected by the Federal government. They have a governor and a unicameral legislative body elected directly by their voters. They also have independent Courts of Law for common justice. Despite this, states have much less autonomy to create their own laws than in the United States. For example, criminal and civil laws can be voted by only the federal bicameral Congress and are uniform throughout the country. 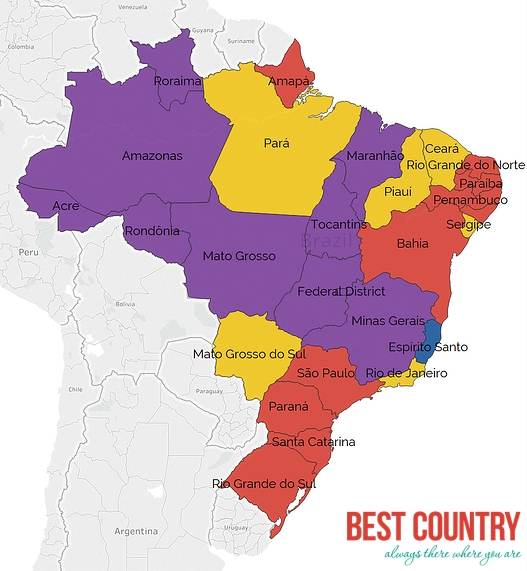 The states and the federal district may be grouped into regions: Northern, Northeast, Central-West, Southeast and Southern. The Brazilian regions are merely geographical, not political or administrative divisions, and they do not have any specific form of government. Although defined by law, Brazilian regions are useful mainly for statistical purposes, and also to define the distribution of federal funds in development projects.

Municipalities, as the states, have autonomous administrations, collect their own taxes and receive a share of taxes collected by the Union and state government. Each has a mayor and an elected legislative body, but no separate Court of Law. Indeed, a Court of Law organized by the state can encompass many municipalities in a single justice administrative division called comarca (county).