Wedding is one of the most interesting family traditions, in all cultures around the world. It supposes different customs for different people, which can be of religious, economical, legislative and folklore nature. The Romanian folk rituals are performed in order to bring about happiness, prosperity, social integration and fecundity to the young couple. These rituals vary from region to region, but one of common elements is the popular costumes the bride and the groom have to wear and which are full of symbolism.

In Moldavia, for instance, the wedding traditions are in accordance with the common belief that a person who didn't manage to build a home, to raise kids, to dig a proper well and to plant a tree has failed in his life.

This explains the beauty of Moldavian houses, the green abundance of vegetation there and the great number of wells found in that area. One of the typically Moldavian traditions still kept nowadays is that of showing respect and thanksgiving to the parents by a bowing gesture. 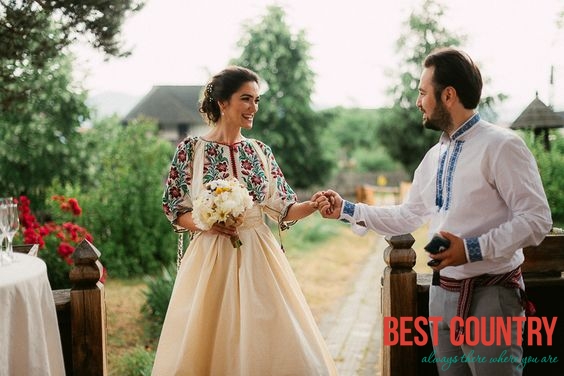 The traditional wedding is rich in adornment and has also strong moral elements. Apart from that, the party is meant to last until daybreak, and it consists of having plenty of delicious food and wine, performing traditional dances and singing songs.

Also, as a symbolic gesture, when the party reaches dawn, the bride has to hold a child in her arms, to ensure having a houseful of children. Before passing the threshold of their new home, the two are sprinkled with a grain shower, in that is the symbol of a prosperous life.

In Maramures (county in the north of Romania) the wedding has many symbolic values and several stages that are to be followed as such in order to respect the ancient custom. All in all, the ceremony is quite simple.

The first step is taken when a person of trust from the groom's family goes to the bride's house to propose to the girl. The positive answer usually comes after having asked for three times, then the proposer and the girl parents talk about the bride's dowry and decide together the date of the engagement ceremony.

The whole walk to the wedding place and the entire ceremony is based on symbolic elements, way of dressing, gestures, a certain order of events that needs to be fully respected.

The way of dressing naturally plays an important role for the young couple and their desire to follow the ancient customs.

Thus, the bride needs to wear a white shirt and skirt, with a white apron over it, then a sleeveless woolen coat over it, and a red belt at the waist.

The groom simply has to wear the traditional "large pants", a white shirt made of hemp, and the same sleeveless coat over them.

There is also an emotional part to the whole ceremony, especially during the so-called "forgiving moments", when the bride and the groom have to ask for forgiveness from the part of their parents, for possible mistakes they've made before this special occasion.

When the groom comes to the girl's house to pick her up, he is usually accompanied by the godfather, by another man carrying a flag, and some more people.

There are certain rituals to be performed during the act of proposal, and one of them is performed by the mother-in-law.

She washes the cheeks of the groom and of the bride when the girl comes to her future parents-in-law's house. This is supposed to suggest the fact that the future bride is accepted in her new family.

Of course, there are some more post-marriage rituals, implying some specific practices and beliefs. Such is the act performed by the newly-wed woman when she has to chop a piece of wood by just one hit with the help of an ax.

This is believed to ensure an easy birth to the young lady. Another such custom would be the action of spinning the wool, so that the young bride would be a hostess of good name and status.

These are but a few examples of traditional elements for this sacred ceremonial act. Many are still preserved these days, while others are lost back in history.