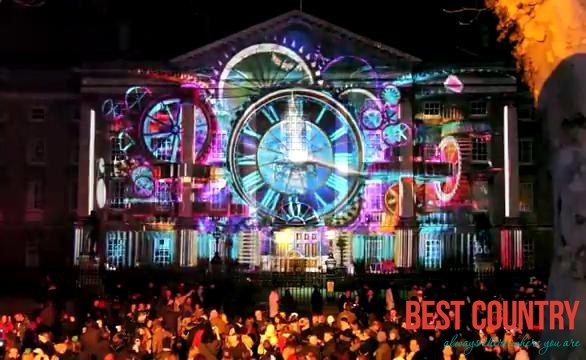 There's simply no better way of starting off your New Year than celebrating it in Ireland, as we do know how to throw a party! New Year's Eve is a huge occasion in Ireland, with family gatherings, lots of New Year gala balls and some lively street parties.

Ireland is renowned for traditions and superstitions – many of which have surrounded the New Year's celebrations.

Long ago in Ireland it was customary to begin a new year with a clean house, so houses were thoroughly cleaned as it was thought that a spotless house was to be good omen for the year ahead.

Even after all the Christmas festivities, the Irish liked to have their houses full with provisions and the cellar filled with coals on New Year's Eve. This was done in the hope that the coming year would be equally as plentiful.

The family sat around the table and enjoyed a big meal and counted in the New Year together.

Another Irish tradition that was carried out to bring in the New Year, involved banging on the doors and walls of the house with the Christmas bread!

It sounds daft, but this custom was thought to chase the bad luck out and bring good spirits to the household. It was also thought that this ritual was done in the hope of having enough bread for the New Year.

In the olden days, on New Year's night they'd remember those in the family who'd passed on the year before.

They did this by setting a place at the table and leaving the door unlatched. Thankfully for most the only spirits that passed through the door were the ones that came in a bottle!

Who would be the first person to pass over the threshold of your home in the New Year?

If it was a tall dark and handsome man it was said to bring luck, but how they prayed that it wouldn’t be a young red haired girl who’d bring nothing but hardship and grief!

And although we don’t know if it brought anyone any luck – many young women put a little bit of mistletoe under their pillow before they slept on New Years Eve in the hope that the love of their life would come along in the next year!

All around the world people celebrate the coming of a New Year.

Unfortunately it kind of brings an end to the festive period.

To celebrate the New Year in Ireland today, some have parties, some head to dinner with friends, some go to black tie balls and some just head down to the local for a few pints.

In a small fishing village in County Kerry called Portmagee they go against the grain and celebrate the Old Year! This is a very popular event and they celebrate everything that happened that year with music and dance.

If that doesn't tickle your fancy, why not make your way to the beautiful Achill Island off the coast of County Mayo as this is the best place to watch the last sunset of the year fall over Europe.

Watch it go down from Minaun Heights and afterwards enjoy the pipe bands playing in the village at midnight.

After a hard night's celebrating you can take a dip in the ice-cold waters of the Atlantic and join in on the traditional New Year's Day swim which takes place on Silver Strand at around 1pm.

If you're thinking about heading to Ireland for New Years then we recommend you book your accommodation now, as this is a very busy time of the year.