Dublin is the capital of Ireland 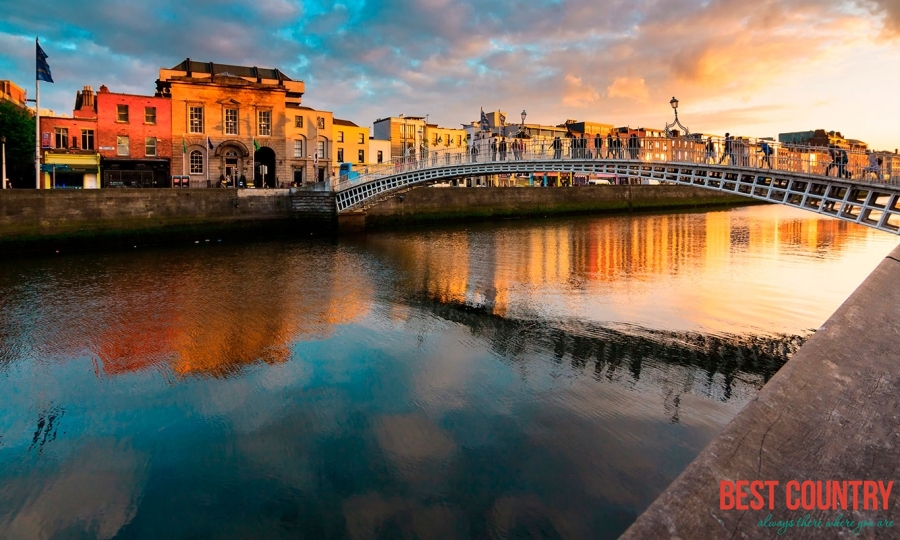 In County Dublin, part of the province of Leinster, Dublin lies nestled around the mouth of the river Liffey and Dublin Bay on Ireland's east coast.

1,030,431 (largest city in Ireland and heading the list of the twenty largest cities and towns of Ireland)

A Short History of Dublin

The first documented settlement here was a "permanent raiding camp" of the Vikings established in 841. Only in the 10th century a trading colony was founded by the Vikings near today's Christ Church Cathedral and called after the nearby "dark pool", in Irish dubh linn.

After the Anglo-Norman invasion and during the middle ages Dublin was the center of (Anglo-Norman) power and an important merchant city.

Major growth started during the 17th century and part of the city was rebuilt in formal Georgian style.

Around the time of the French Revolution (1789) Dublin was considered to be one of the fairest and richest cities in Europe.

At the same time abysmal slums developed and the inner city declined after the Act of Union (1800) with many wealthy citizens leaving for London.

Dublin was the center of the Easter Rising in 1916 and became capital of the Free State and Republic - while the fabric of the city decayed dramatically.

Only in the 1960s moves were made to to rebuild Dublin, mainly by tearing down old houses and building new office blocks. Social housing was built on a grand and uninspiring scale, leading to new problem areas.

Only in the 1980s a sensible policy of re-construction, combining preservation and renewal, was started.

The booming "Celtic Tiger" economy of the 1990s led to further growth, with the now affluent Dubliners moving out into suburban areas. Here poorly planned "estates" destroyed the green belt with their cancerous growth.

The capital is a strange mixture of the busy city center, outlying village-like communities and huge suburban estates all melting together into one big metropolitan sprawl.

The tourist will more than likely stick to the walkable center (roughly defined by Parnell Square to the North, St Stephen's Green to the South, Custom House to the East and the cathedrals to the West), with only excursions to the Phoenix Park or St James' Gate (Guinness) taking him out of this area.

But even in this small part nearly all aspects of Dublin life can be seen - from the hustle and bustle of the ultra-modern IFSC to the drug-riddled areas of social housing nearby, from the Georgian splendor of Merrion Square to the utilitarian office blocks placed between here and the Liffey, and including cobbled sidestreets, magnificent parks, stately (and mostly state-owned) buildings and seemingly millions of young people.

What to Expect in Dublin

Dublin used to be Europe's "Number One Party Destination" and on busy weekends can still feel like Daytona Beach during Spring Break.

Without the bikinis and swimsuits, naturally. Cheap air travel and a hedonistic image (ceol agus craic) fostered by the tourism industry attract crowds of young Europeans that brave the Dublin weather and prices.

Add to this language students (mostly from France, Italy and Spain) as well as sightseeing tourists and you will appreciate that Dublin is best described as "busy".

Under no circumstances should the visitor expect a quaint and quiet, old fashioned town (though all these attributes can be applied to parts of Dublin). Dublin can be noisy and overwhelming, especially between April and September.

When to Visit Dublin

Dublin can be visited throughout the year. The annual St Patrick's Festival (around March 17th) draws huge crowds and may be seen as the start of the tourist season, it stays busy well into September. Pre-Christmas weekends are positively claustrophobic and best avoided.

Places to Visit in Dublin

Dublin is full of attractions so you will have to pick. Try my recommendations of the Top 10 Attractions of Dublin and an essential walk through Dublin's city center for inspiration. Or head straight for the lesser known sights of Dublin.

Places to Avoid in Dublin

The sidestreets of O'Connell Street and especially the Liffey boardwalk are not generally considered "safe" at night.