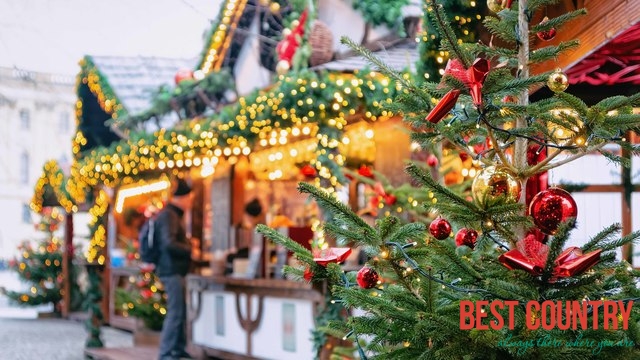 Nollaig Shona Dhuit is Merry Christmas in Irish Gaelic, which is still taught in schools in Eire, the Irish Republic. Northern Ireland is part of the United Kingdom. Christmas in Ireland is a traditional holiday in both parts of the island, and very much a family and religious celebration!

Christmas is the important celebration, rather than the New Year, which has more emphasis in Scotland.

The festivities last from Christmas Eve until January 6th, when decorations are put away.

Most homes have fireplaces with mantelpieces and these are often decorated with holly and ornaments. It is common to hang mistletoe in a doorway (and to kiss under it!).

Many children are given Advent Calendars, and each day in December they open one of the slots for a chocolate treat.

It is traditional to give gifts (usually money) before the holidays to people who perform services during the year, for example to the milkman who delivers milk bottles to the door.

People also clean their houses thoroughly and in the past, it was common to whitewash as well, as a means of purification.

During December, people bake Christmas cakes, puddings and mince pies. As a child I used to make shortbread, which my grandfather particularly enjoyed!

Hospitality is a way of life in Ireland, and anyone who visits the house, is entertained with tea and cakes, especially during the holidays.

Trees are decorated with a star or an angel on top. Children put a stocking (or a pillowcase!) at the bottom of their beds for Santa Claus. I remember waking up on Christmas morning and going through pillowcases of toys in my own or my brother's bedroom.

Gifts usually include an apple, an orange or tangerine, and chocolate coins. My mother recalls receiving a piece of coal or peat (used as fuel in fireplaces) in lean years. This was not given for bad behavior but simply because there was nothing else.

In many areas, on Christmas Eve, a lit candle is placed in a window (nowadays it can be an electric light!). This goes back to traditions of hospitality in ancient times.

The idea is to help light the way of the Holy Family or any other poor traveller who is out on that night.

There can be a White Christmas, but snowfalls are rarely heavy. As in many countries, it is very important for family members to be together for Christmas Eve and Christmas Day.

People often have Christmas dinner in the afternoon, any time between 1 and 3 p.m.. As a child, I remember being served more than one 'fowl' for Christmas dinner - usually a goose and sometimes chicken, duck or pheasant as well, along with stuffing, roast potatoes and gravy.

Now turkey is much more common along with a ham, and sometimes spiced beef. Dessert is Christmas pudding with rum sauce or brandy butter and cream.

Sometimes a trifle is served as well! Christmas Crackers are on the table, and everyone pulls one with the person next to them. Whoever ends up with the longer end gets the contents, which include a party hat, a small toy and a riddle.

December 26th (Boxing Day in England) is celebrated as St. Stephen's Day in Eire and is a public holiday. A wren supposedly betrayed the presence of St. Stephen when he was in hiding. He was then caught and executed.

Wren boys go from door to door with a wren on a stick (today the wren is not a real one), singing a traditional song and begging for treats. Pantomines, such as Babes in the Wood or Puss in Boots, are performed at this time also