If Bulgaria is unknown to you, then Bulgarian food will appear even more mysterious. That is why there are certain things you should know before you rush into a tavern and start ordering!

First of all Bulgarian national cuisine is really varies depending what part of the country you are in, as many peoples have crossed these lands and left their influence on the food.

This again is the reason why so many dishes have untranslatable names, but excellent taste so you just need to ask the waiter for assistance and perhaps a bit of an explanation.

Situated in the Balkan Peninsula Bulgaria, as all neighboring countries, make great use of different kinds of meat, fish, potatoes, aborigine and many other vegetables, spices and herbs.

It is very common for the main dish to be a meat or grilled mince meat. So, if you are a vegetarian better try the salads, cheese and yellow cheese appetizers or soups.

There is a great variety of vegetable soups, some of which are very similar to the British ones (from spinach, nettle, dock, sorrel, tomatoes, etc.).

So its very useful to get your head round these when ordering a package meal.

But it is the principles of typical Bulgarian way of cooking that bring out the rich, unforgettable taste of every meal. Dishes are prepared in a moderate oven, usually stewed and not fried; the pots are firmly closed; a wide variety of ingredients is used; vegetable oil and fats are very common; condiments are few and all ingredients are usually put together to stew into their own juice.

While in other countries meat, vegetables and sauce are cooked separately, in Bulgaria they are all cooked together in a saucepan or casserole, or in an earthenware pot on a slow fire.

And now comes the other typical feature of Bulgarian cooking- the abundant use of herbs and spices. There even are spice-related expressions in the every day Bulgarian language, such as “a peppery price” (pepper was very expensive in the 15th century) or “parsley in every pot” (for someone who forces his opinion on everyone and everything). 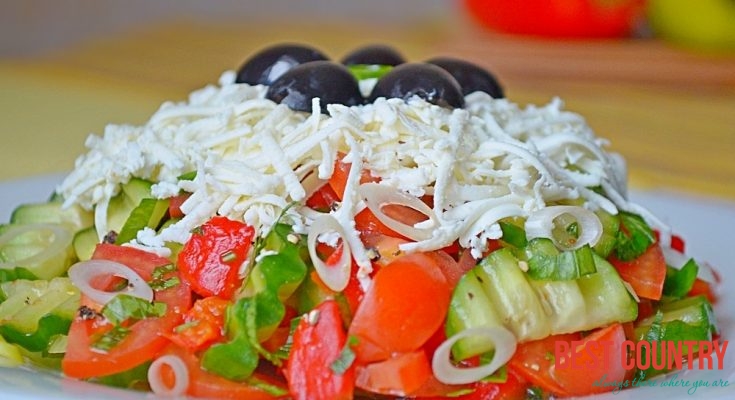 Onion is the other thing which is used in almost every soup, salad and dish. It is true that the vegetable is said to stimulate appetite, have a disinfectant action, and help digestion but the main reason for its wide use in traditional Bulgarian cuisine is its availability all year round.

So, if you are not much of an onion lover just let the waiter know that you prefer your dish without this ‘fragrant’ ingredient.

The Bulgarian national cuisine is mistakenly said to be chilly. Some traditional dishes are pungent, but not as much as those of Mexican, Arab, Hungarian, Indian or Turkish cuisine. Chilies and pickles are served separately for those who like their food hot.

After dinner, you might be offered some white or yellow cheese or traditional Bulgarian ‘loukanka’- a highly seasoned flat sausage- to go with your after drink.

Unlike the common yellow cheese Bulgarian ‘kashkaval’ is made mainly from sheep’s milk and is a superb appetizer for wines as well as a vital ingredient of many warm soups, meals and pastry delicacies.

Bulgarian traditional sweet courses are actually Turkish ones- due to the century long influence. Worth trying is the Bulgarian which has been part of traditional cuisine for thousands of years.

Experience has taught Bulgarians that yoghurt is not only a great dessert and a cool drink in hot summer time, but it also helps after drinking too much alcohol and eases upset stomach after over-eating. Besides it is a low calorie food suitable for all diets.

Bulgarian cuisine, a wealth of flavors and experiences and not to be missed!