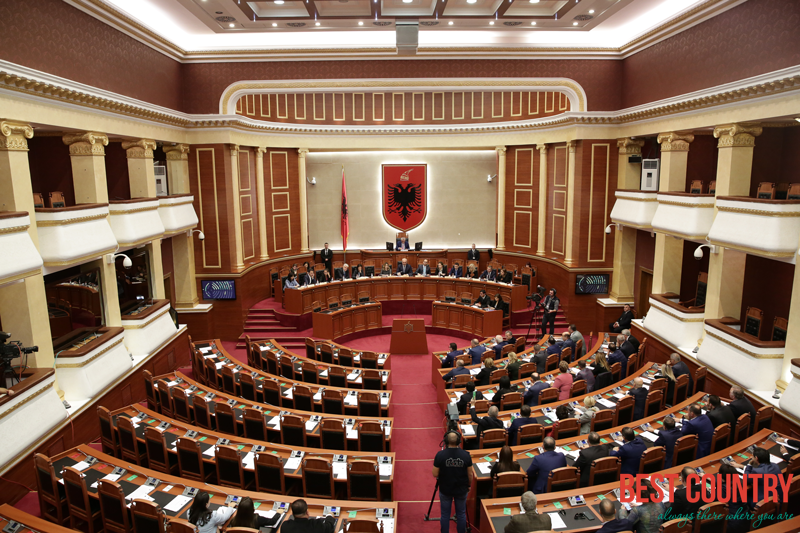 Politics of Albania takes place in a framework of a parliamentary representative democracy is the head of government, and of a multi-party system. Executive power is exercised by the government. Legislative power is vested in both the government and parliament, the Assembly of the Republic of Albania (Kuvendi i Republikës së Shqipërisë). Since 1991, the introduction of pluralism, the party system is dominated by the Democratic Party of Albania and the (post-communist) Socialist Party of Albania.

The President has the power to guarantee observation of the constitution and all laws, act as commander in chief of the armed forces, exercise the duties of the Assembly of the Republic of Albania when the Assembly is not in session, and appoint the Chairman of the Council of Ministers (Prime Minister).

The People's Assembly must give final approval of the composition of the Council. The Council is responsible for carrying out both foreign and domestic policies. It directs and controls the activities of the ministries and other state organs.

The Assembly of the Republic of Albania (Kuvendi i Republikës së Shqipërisë) is the lawmaking body in Albania. There are 140 deputies in the Assembly, of which 100 are directly elected by an absolute majority of the voters, and 40 are chosen by their parties on the basis of proportional representation.

The President of the Assembly (or Speaker) has two deputies and chairs the Assembly. There are 15 permanent commissions, or committees. Parliamentary elections are held at least every 4 years.

The court system consists of a Constitutional Court, the Court of Cassation, appeals courts, and district courts.

The remaining courts are each divided into three jurisdictions: criminal, civil, and military. The Court of Cassation is the highest court of appeal and consists of 11 members appointed by the People's Assembly and serving 7-year terms.

The President of the Republic chairs the High Council of Justice (HCJ) charged with appointing and dismissing other judges. The HCJ was expanded in late 1997 to comprise 13 members from among the various branches of government.