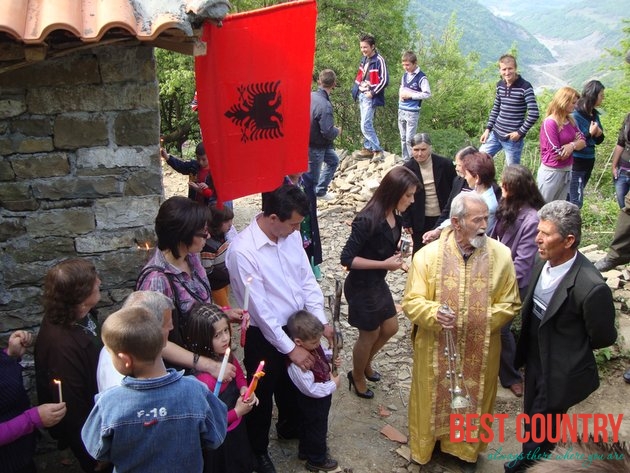 For a long time, roughly half-a-century, celebrating a religious festivity was a pure act of rebellion in Albania. Former dictator Enver Hoxha in his attempt to create the homo-sovieticus had banned anything from Christmas to Carnivals. Any challenge to the rule and you could be drop-shipped to the gulags as priority mail.

Otherwise what we had were tons of new-age, proletarian heaven celebrations, like Stalin’s birthday, Marx’s circumcision or the acid-stamped rave party for the electrification of Albania.

After the country emerged from a burka shaped lifestyle behind the iron curtain, religious festivities and ceremonies returned. Gone were the glorious military parades, where you would line up at the break of dawn to challenge NATO with carton-box missiles, and spook all the so called “draconian” democracies that mistreated the glorified worker.

Now, if you ask any Albanian on his religious affiliation; most of the time you will end up listening to a diatribe that sounds like this:

“My grandmother from my mother’s side was a Muslim, so was the grandpa from my dad’s, though my father does not believe in god. My other grandfather is Greek Orthodox, but I really don’t take religion that seriously. I think there must be a god.”

Well, quite devout as it may seem! However, such a long draught in religious festivities has turned them in something they would never dream of. Yes, to Albanians they are sexy, mystified by a long absence and a good reason to go out and enjoy yourself.

One such occasion that is drifting and lingering everyone’s attention is certainly the Greek Orthodox Easter. Taking part on the ceremony of the re-birth of Christ is somehow a good occasion to stretch for a walk at midnight, jabber with your friends and certainly light a candle in omen for good fortune.

So Muslims, Catholics and Greek Orthodoxs, are all the time celebrating and participating in each-others religious festivities. It’s a win-win situation. You could have colored eggs for Easter, baklava for Eid, and a glass of wine for Christmas- actually a personal favorite.

Albania still classifies as the only country in Europe with a majority Muslim population. With some “reliable” statistics from the 1930s the emotional split between Allah and Jesus facing east or west is as follows. Approximately 70 percent of the population is Muslim, 20 percent Greek Orthodox and the remaining 10 percent is catholic.

Having survived the Cold War, 50-years of a satanically styled communist dictatorship, not to mention some 40-years of being the first country in the world to proudly call itself atheist that stubborn little pile of numbers still defines us in the eyes of the others.

Theodor Billroth, the father of abdominal surgery, once noted that; “statistics are like women; mirrors of purest virtue and truth, or like whores to use as one pleases.”