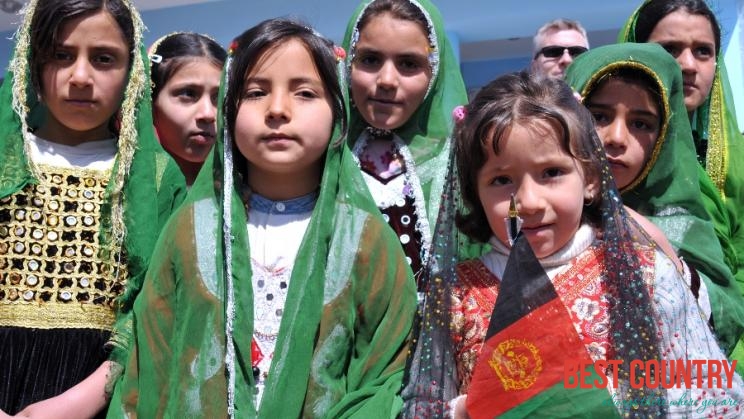 The population of Afghanistan is around 37,135,635 in 2019, which includes the roughly 3 million Afghan citizens living as refugees in both Pakistan and Iran. The nation is composed of a multi-ethnic and multilingual society, reflecting its location astride historic trade and invasion routes between Central Asia, Southern Asia, and Western Asia. Its largest ethnic group is the Pashtun, followed by Tajik, Hazara, Uzbek, Aimak, Turkmen, Baloch and a few others.

Approximately 46% of the population is under 15 years of age, and 74% of all Afghans live in rural areas. The average woman gives birth to five children during her entire life, the highest fertilty rate outside of Africa. 6.8% of all babies die in child-birth or infancy. Life expectancy was reported in 2015 at 60.5 years and only 0.04% of the population has HIV.

Pashto and Dari are both the official languages of the country. Dari, which is known as the Afghan Persian, functions as the lingua franca. Pashto is widely used in the region south of the Hindu Kush mountains and the Indus River in neighboring Pakistan. Uzbek and Turkmen are smaller languages spoken in parts of the north. Multilingualism is common throughout the country, especially in the major cities.

Islam is the religion of more than 99% of Afghanistan's citizens. Roughly 90% of the population practice Sunni Islam and belong to the Hanafi Islamic law school, while 7–15% are followers of Shia Islam; the majority of whom belong to the Twelver branch, with smaller numbers of Ismailis. The remaining 1% or less practice other religions such as Sikhism and Hinduism. Excluding urban populations in the principal cities, most People are organized into tribal and other kinship-based groups, who follow their own traditional customs. Pashtunwali is followed by Pashtuns but is also a custom followed by other Afghans throughout the country. The majority of the country's population lives in rural areas and is involved in agricultural activities.

As of 2019, the total population of Afghanistan is around 37,135,635, which includes the 3 million Afghan nationals living in both Pakistan and Iran. Afghanistan's Central Statistics Organization (CSO) stated in 2011 that the total number of Afghans living inside Afghanistan was about 26 million and by 2017 it reached 29.2 million. Of this, 15 million are males and 14.2 million are females. About 22% of the population is urbanite and the remaining 78% live in rural areas.

The population was reported in 1979 at about 15.5 million. From 1979 until the end of 1983, some 5 million people left the country to take shelter in neighboring northwestern Pakistan and eastern Iran. This exodus was largely unchecked by any government. The Afghan government in 1983 reported a population of 15.96 million, which presumably included the exodus.

It is assumed that roughly 600,000 to as high as 2 million Afghans may have been killed during the various 1979–2001 wars. These figures are highly questionable and no attempt has ever been made to verify them. The country's population is expected to reach 82 million by 2050.