Kabul is the capital of Afghanistan 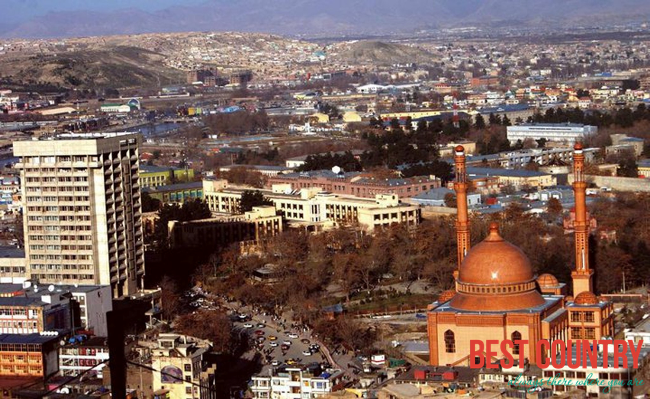 Kabul, the capital city of Afghanistan, has been an important trade and cultural center in the country for centuries. The city is war torn, especially the western part. Don't be despaired though, you can still enjoy yourself in the city. Kabul is situated on the banks of Kabul river.

The city of Kabul, which used to be a tourist attraction, has lost its charm during the last 24 years of its history.

Infrastructures such as roads and traffic system, telephone and electricity system, water sanitation, renovation of buildings is in shambles and the need for reconstruction is very much needed to make the city a better place for living. The major places of interest in Kabul are as follows

Kabul Museum, also known as Afghan National Museum, boasts of the finest collection of old Afghan items which tell about the history of Afghanistan and its rulers.

Built in 1920, the museum was one of the prime attraction of central Asia. Many treasures and artifacts were stored in the museum.

The museum housed the most comprehensive record of Central Asian history. Bagram Collection was one of the largest display in the museum. The museum testifies the effect of India, Rome, Greece, Egypt, and Central Asia on Afghanistan.

Several of these treasures were tragically lost when the Kabul Museum was bombed in 1993. The Kabul Museum has undergone restoration with the help of UNESCO and reopened again in 2004.

Bala Hisar fortress was built around 5th century B.C. During the ancient times, the citadel was considered the main defensive complex for the Afghan rulers. The fortress was partially destroyed by General Roberts in 1879.

Bala Hissar was restored under Abdur Rahman and is now occupied by the Afghan National Army. Entry to the fortress is restricted.

Earlier known as Bagh-e-Babur, Babur's garden is a picnic park with swimming pool. The park is also famous for the tomb of Moghul Emperor Babur, the founder of the Moghul empire.

Moghul Emperor Babur laid out these gardens in 16th century and later Amir Abdul Rehman made few additions. Top of the terrace in the garden provides magnificent view of the whole Kabul city. Babur's garden is really worth a visit.

ARG citadel was built by Amir Abdul Rahman in 1880. Salam Khana (hall of salutation) and Dilkosha Palace ( Heart Delight Palace) were the central attractions of the citadel.

Amir Abdul Rahman (1880-1901) built this citadel to operate the Bala Hisar places. Later it was used for presidential offices until it was left in ruin due to heavy bombardments.

Kabul Zoo was inaugurated in 1967. Afghan fauna typically flourishes in the zoo. The zoo is located on the bank of Kabul river. Now a days Chinese government and North Carolina zoo are taking care of the zoo by donating animals.

Mausoleum of Amir Abdur Rahman, is one of the landmark of the city. It stands in Zarnegar Park, in the center of the city.

When built originally, the building was a palace originally but later converted to mausoleum by the son of Abdur Rahman, after his death.

The mausoleum is a grand building, with a bulbous red dome sitting atop a whitewashed drum and octagonal, surmounted by tiny minarets. Mausoleum presents one of the finest example of 19th century baroque architecture still remaining in Kabul.

Timur Shah inherited a unified Afghan kingdom from his father Ahmed Shah Durrani on 1772, and moved the capital from Kandahar to Kabul.

His mausoleum (built in 1816) is an octagonal red brick structure, surmounted by a plain brick drum and shallow dome.

A small park surrounds the mausoleum, now denuded of its trees and the site of a cloth market. The mausoleum was damaged during the civil war and is being renovated by the Aga Khan Foundation.

Mausoleum of Nadir Shah is one of the cardinal attractions of the city. The mausoleum is white- marbled building with a blue domes, presenting an enormous view. The mausoleum stands on the Tapa Marajan hill.

The rich Islamic heritage can be seen in architecture of many mosques in Afghanistan and Id Gah Mosque is one of them. The mosque is the prime spot for national and religious celebrations in Kabul.

Being the largest mosque in Kabul, Id Gah Mosque or Eid Gah Mosque was built by King Abdor Rahman Khan in 1893. Located in the Shar-e_barq of Kabul, the mosque is the cardinal religious site of Kabul.

Shah-Do-Shamshira Mosque, the word means the Mosque of the King of Two Swords, relates to an early legend concerning the arrival of Islam in Kabul.

The mosque is located opposite the river from Timur Shah Mausoleum. The large two-storied mosque was built in 1920.

A two-storied structure in yellow, is decorated with Italianate stucco, giving an effect that could be described as 'Afghan Baroque'.

Standing in the center of old Kabul, the Pul-e Khishti Mosque was originally erected in the late 18th Century, but largely rebuilt under Zahir Shah in the late 1960s.

It can be picked out by its large blue dome but is otherwise architecturally indistinct, a mix of international modern style punctuated with traditional Afghan tiling.

The mosque is at Chahrari Haji Yaqub on the edge of the Sherpur and Shahr-e Nau districts.

The external blue tiling on the facade were produced at Herat's Friday Mosque tile workshop.

The mosque was only built in 1957, and is referred to locally as the Masjid-e Haji Yaqub. The identity of Haji Yaqub himself is unclear.