Islamic calendar consists of twelve lunar months. Each month may be of 29 or 30 days depending on the sighting of the new moon. An lunar year has, on average, 355 days.

The reason in the variances is that lunar calendar is 10 days less than the solar year. Hence an Islamic year is moved ahead 10 days each year in solar calendar year.

Holidays such as Ramadan, Eid ul-Fitr, Eid ul-Adha, Ashura and Mawlud Nabi are dependent on the Islamic lunar calendar and vary from year to year. 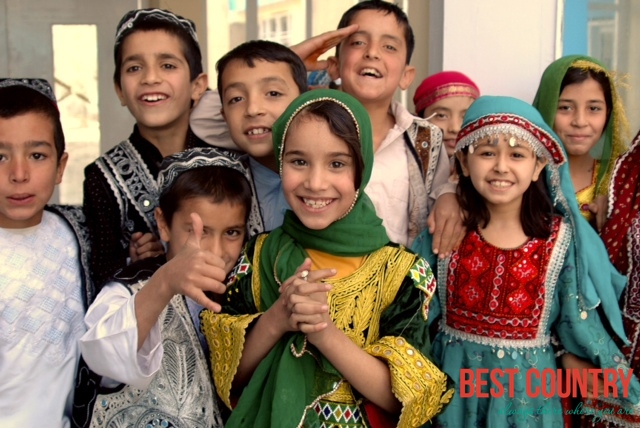 Eid al-Fitr (Eid-e-Fitr): The most important month of the Islamic calendar is Ramadan, the ninth month, during which every Muslim -except the old, young, pregnant women and the sick- is required to avoid food, drink from dawn to dusk.

The feast of Eid al-Fitr commences after the month of fasting ends, on the first day of the month of Shawal. Celebrations usually last for about three days.

Congregational prayers are held in mosques, after which Afghans visit their friends and relatives. New clothes, especially for the children, are made, and food is prepared.

Eid al-Adha (Eid-e-Qurban): Once the fasting month and ensuring celebrations have ended, it is time for those planning to perform their pilgrimage to Mecca to start preparations for their journey.

The hajj, takes place in the 12th month of the Muslim calendar, the rituals being performed in Mecca between the 7th and 10th days.

The feast of Eid al-Adha is celebrated on the 10th day of the month. Animals, such as sheep, goats, and camels, are sacrificed, especially by those who have already performed the hajj.

This commemorates the slaying of a sheep, instead of Isaac, as a sacrifice by his father Abraham, at the command of the Allah. One third of the slaughtered animal is used by the family, another third is distributed to relatives and the rest is given to the poor.

Now-Roz (New Year’s Day): Literally meaning a new day. Nau Roz is the first day of spring and of the Afghan solar calendar, and falls on March 21st.

This festival dates back to the time when Zoroastrianism was still a powerful religion, long before Islam arrived in Afghanistan. During the celebrations, lavish meals are prepared in Afghan homes.

Two dishes, Samanak and haft-mehwah are specially cooked for the occasion. Samanak, a dessert like made of wheat and sugar, can take more than two days to prepare.

Mawlud-un Nabi: A large number of Muslims do not believe in celebrating birthdays of death anniversaries because there is no historical evidence that such was the practice of the Holy Prophet.

However, similarly large number of Muslims do commemorate the birth anniversary of the Holy Prophet on 12 Rabi-ul-Awwal of the Islamic lunar calendar year.

For Muslims, this date marks the most important event in the history of the mankind because the Holy Prophet Muhammad (peace be upon him) is regarded as the Chief of the Prophet, to whom the Holy Quran was revealed.

The extent of the festivities, on this occasion, is restricted because of the fact that the same marks the death anniversary of the Holy Prophet (peace be upon him) as well.

On this occasion public meetings are held in the mosques where religious leaders and scholars make speeches on different aspects of the life of the Holy Prophet (peace be upon him).

The stories of the Prophet’s birth, childhood, youth and adult life, his character, teachings, sufferings, and forgiveness of even his most bitter enemies, his fortitude in the face of general opposition, leadership in battles, bravery, wisdom, preaching and his final triumph through Allah’s mercy over the hearts of people are narrated in detail. Salutations and songs in his praise are recited.

In some countries, streets, mosques and buildings are decorated with colorful buntings and pennants and well illuminated at night. Affluent Muslims generously donate to charity. Feasts are arranged and food is served to guests and the poor.

Lailat-ul Qadr: This blessed night is also called the night of Power.

It is the particular night in the month of Ramadan when the Holy Quran first began to be revealed.

The Holy Quran states: “The month of Ramadan is the month in which the Quran began to be revealed, the Book which comprises guidance for mankind and clear proofs of guidance and divine signs which discriminate between truth and falsehood … “(2:186)

The translation of first verses which were revealed to the Holy Prophet Muhammad, peace be upon him, were the following: ‘Recite in the name of thy Lord Who created everything. He created man from a clot of blood.

Recite, for thy Lord is Most Beneficent, Who has taught by the pen, taught man that which he knew not.’ (96:2-6) The Holy Prophet (PBUH), was forty years of age at that time. The Holy Quran regards the Night of Decree as better that one thousand months.

Muharram: Muharram festival commemorates the martyrdom of Hazrat Imam Hussain, the grandson of the Holy Prophet (peace be upon him). This festival starts at the 1st day of Muharram and lasts for 10 days until 10th of Muharram. Muharram is the first month of Islamic calendar.

To the Shi’ites, the most important religious period of the year is the first 10 days of the new year. This is a period of mourning, in memory of the killing of Hussein, the grandson of Prophet Mohammad (PBUH), at Karbala on October 10 680 A.D., along with 72 of his immediate family and followers.

The festival climaxes on the tenth day of the month of Muharram. Ashura is an optional fast day. As the shi’ite population is relatively small, this day is celebrated on a smaller scale in Afghanistan.

During this month, while on a journey, Hazrat Imam Hussain, his family members and a number of his followers were surrounded by the forces of Yazid, the Muslim ruler of the time.

During the siege, they were deprived of food and water and many of them were put to death. The incident happened at a place called Karbala in Iraq in 61st year after Hijra.

This dispute was result of a disagreement among Muslims on the question of succession after the demise of Hazrat Ali, the fourth caliph.

Some sects of Muslims hold meetings where speeches are made on the happenings of Karbala and on the lives of martyrs.

The Shias, however, observe this festival in a different fashion. As Muharram, the first month of the Muslim year, approaches, they put on black clothes, as black is regarded as a color of mourning.

Majalis (assemblies) are held every day during the first nine days where Shia orators relate the incident of the martyrdom of Hazrat Imam Hussain and his party in a great detail.

On the 10th day of Muharram, large processions are formed and the devoted followers parade the streets holding banners and carrying models of the mausoleum of Hazrat Imam Hussain and his people, who fell at Karbala.

They show their grief and sorrow by inflicting wounds on their own bodies with sharp metal tied to chain with which they scourge themselves.

This is done in order to depict the sufferings of the martyrs. It is a sad occasion and everyone in the procession chants “Ya Hussain”, with loud wails of lamentation.

Generally a white horse beautifully decorated for the occasion, is also included in the procession, to mark the empty mount of Hazrat Imam Hussain after his martyrdom.

During these first ten days of Muharram, drinking posts are also set up temporarily by the Shia community where water and juices are served to all, free of charge.

Victory of the Muslim Nations April 28

National Labour Day (May Day) May 1

Mawlud-un Nabi (Birth of the Prophet)*

Eid ul-Adha (Feast of the Sacrifice)*

* Dates may vary according to the sighting of the moon.