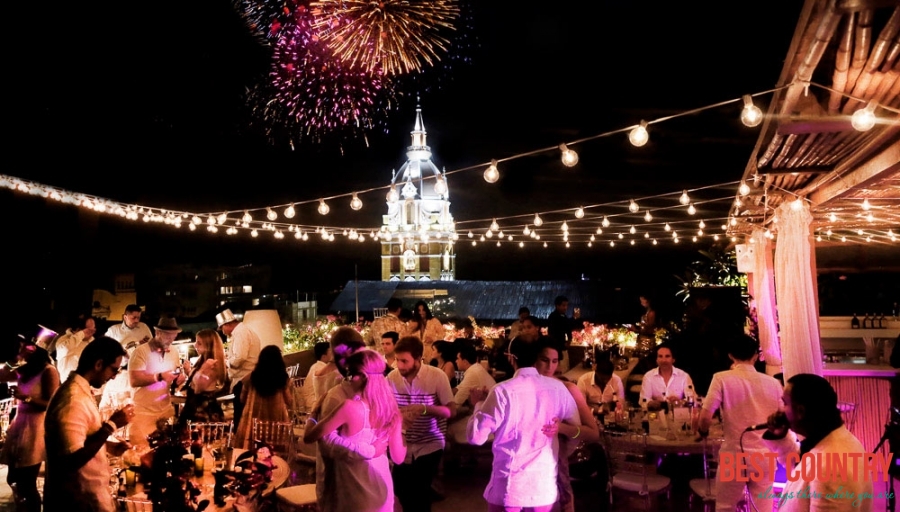 New Year is considered as a very prominent and special time by the natives of Colombia. Colombia is considered as a country with a blend of different rich customs, and traditions, which are pretty perceptible by the way with which people in Colombia engage and celebrate New Year. Colombia, which is situated in the northwest part of South America, celebrates its New Year in accordance to the Georgian calendar, i.e. on January 1.

New Year celebrations in Colombia prominently begin at the midnight. Though, parties at discotheques as well as clubs begin much earlier in the evening of 31st December. Other than that, private parties are organized at homes, where close friends and members of the families are invited.

Invitations are send out well in advance to ensure adequate attendance, as potentially, there are many people in the same circle holding New Year parties at the same time. The moment when New Year arrived, everyone wishes one another with good luck and congratulatory messages. Hugging and kissing everyone in the family is considered to be the traditional way with which Happy New Year or Feliz A&#241;o is wished.

Conventionally, there are number of customs and traditions which are followed by Colombian people at the time of New Year. Each of the traditions holds a certain significance of its own. While most of them can be considered to be inspired by the diverse Colombian culture, some of them might appear as if they are closer to superstitions than rather being traditional.

Take a look at some of the most prominent New Year customs and traditions, as followed during the time of celebrations. One might not find someone following all of them or none of them in Colombia as a part of New Year celebrations.

Twelve Grapes: It calls for eating twelve grapes as soon as the clock turns twelve. Each grape is considered to be figure of a month of the New Year. With each grape, one can make a wish. The only clause it states that one has to finish eating all of them within the first minute of the New Year.

Yellow Underwear: It calls for wearing yellow underwear at the moment when New Year arrives. According to beliefs, doing so brings wealth and prosperity in the coming year. One wishing for double prosperity should reverse it and then wear it.

Twelve Shafts of Wheat: It calls for placing twelve shafts of wheat on the dinner table, as doing so ensures abundance of food to eat in the coming year.

Suitcase: It calls for running hard and fast around the house with a suitcase in hand, as doing so ensures travelling in the coming year.

Right Foot First: With clock turning twelve, the first step should be made with the right foot only, as doing so ensures positivity and right decisions in the coming year.

Money Proximity: It calls for keeping some amount of money in form of hard cash, either in hand or pocket, at the time when clock turns twelve. Doing so ensures financial security and stability in the coming year.

Clean Surroundings: It calls for absolute cleaning of households and surroundings on a day prior to New Year. Doing so ensures incoming of positive energy in house and family.

Lentils Luck: It calls for eating lentils along with rice on New Year's Eve. Doing so ensures an year of abundance.

Burn Ano Nuevo: An effigy on the name of the Old Year is made, which is called as A&#241;o Nuevo. It is ties up with fireworks, and at the point of clock ringing twelve, it is burnt. Also, people write their faults, or any feared bad luck on a piece of paper and throw it in the burning effigy. According to beliefs, doing so ensures liberty from all past troubles, sins, and mistakes, as well as bad luck.

Other prominent traditions include baking up a special New Year's bread, which has around coin placed inside it. At midnight, the head of the family cuts the bread, and distributes it among all the family members. Whosoever in the family gets the coin is considered to hold good luck for the entire coming year.

There is another tradition, as a part of which a jewelry piece is put in champagne glass, which is toast at the arrival of New Year. Doing so ensures wealth and prosperity in the coming year.