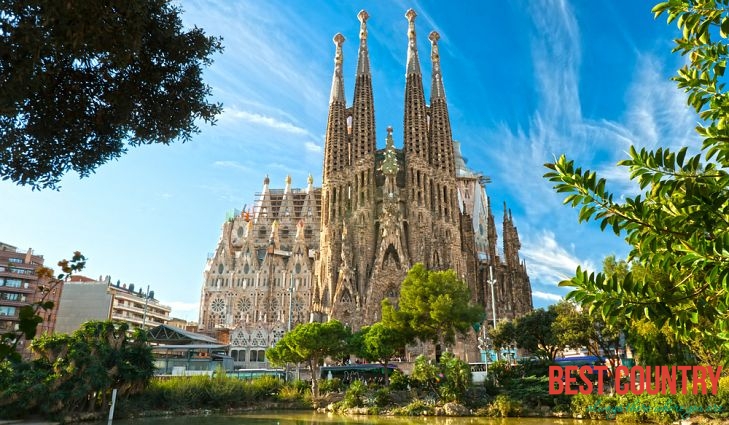 When King Ferdinand and Queen Isabella ruled Spain in the 1400s and 1500s, they decreed that all Spaniards must become Roman Catholics. People who practiced other religions, such as Islam or Judaism, where forced to change religions. If they did not, they were killed or exiled from Spain.

Today, almost 97 percent of Spain´s population is Roman Catholic, although Muslims and Jews in the country now practice their religions freely.

Roman Catholicism is one of the oldest denominations of Christianity. Christianity is based on the teachings of Jesus Christ, whom Christians believe is the Son of God. His life story and teaching are written in the holy book called the New Testament, which is part of the Bible.

In addition to worshiping Christ, Catholics pray to his mother, Mary, and to hundreds of holy people, called saints, through whom God is said to have performed miracles.

Many Christians honor saints by making special journeys, called pilgrimages, to the places where they are buried.

For hundred of years, pilgrims from all over the world have visited the town of Santiago de Compostela, in norther Spain.

They come to celebrate Saint James´ Day on July 25. They believe that Saint James, whom Spaniards call Santiago, is buried in the town´s cathedral. Saint James is Spain´s patron saint, which means that he protects the country from danger.

Legend has it that just as a boat carrying Saint James´ body arrived at Santiago de Compostela, a horse and rider fell into the ocean. Instead of drowning, they emerged from the sea covered in scallop shells.

People believe that Saint James was responsible for this miracle. Today, as pilgrims travel thousands of miles on foot, bicycle, or horseback to Santiago de Compostela, they wear scallop shells as a reminder of the miracle.

One the pilgrims arrive at Santiago de Compostela, they visit Saint James´ tomb and rub the neck of his statue to receive a blessing.

Christians in Spain go on another important pilgrimage to the village of El Rocío, in southern Spain. In the 1400s, a hunter there found a statue of Mary in a tree trunk, in the marshes of the Guadalquivir River.

At first, people from nearby villages journeyed once a year to see the statue. They believed that it had magical healing powers and could perform miracles. Now, almost one million pilgrims travel from all over Spain to see the statue in the church of Nuestra Señora del Rocío, or Our Lady of the Dew.

They shout “Viva la Reina de las Marismas!” or “Hurray for the Queen of the Marshes!” Several times during the week-long festival, which is called Romería del Rocío, people carry Mary´s statue around the village.

Crowds of faithful pilgrims follow the statue and try to touch it for good luck.

Although most Spaniards are Roman Catholics, about 300,000 Muslims live in Spain.

A group of Muslims called Moors came to Spain from northern Africa in 711 A.D. The Moors ruled the country for hundreds of years.

Muslims follow the religion of Islam, which is based on the teachings of God, whom they call Allah, and his prophet Muhammad. These teachings are found in the holy book called the Qur´an, which is written in the Arabic language.

About 12,000 Jews also live in Spain. Jew first came to Spain with Romans, who invaded the country around 200 B.C. and ruled for the next 600 years. Jews follow the teachings of their holy book, the Torah, which is written in the Hebrew language.