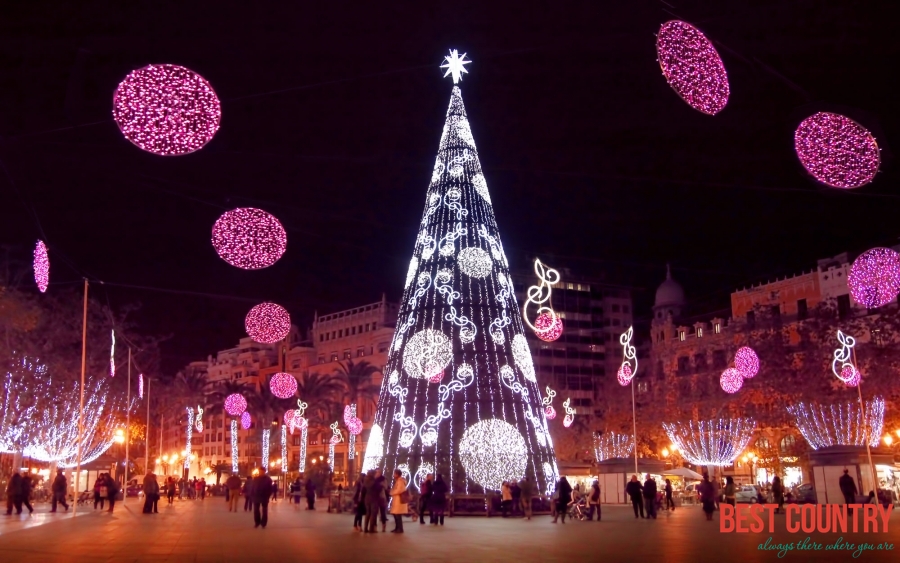 In Spain it is a very festive time at Christmas. On Christmas Eve, as the stars come out, tiny oil lamps are lit in every house, and after Midnight Mass and Christmas Dinner, streets fill with dancers and onlookers. There is a special Christmas dance called the Jota and the words and music have been handed down for hundreds of years. They dance to the sound of guitars and castanets.

Children think of the Three Wise Man as the gift bearers. Tradition has it that they arrive on January 6th, the date the Wise Men gave gifts to Jesus.

Shoes are filled with straw or barley for the tired camels that must carry their riders through the busy night.

By morning the camel food is gone and in place of the straw or barley are presents. Shoes also may be placed on balconies on the night of the 6th January in the hope that the Wise Men will fill them with gifts.

Most homes have a manger, like cathedrals and churches. These are complete with carved figures.

During the weeks before Christmas, families gather around their manger to sing, whilst children play tambourines and dance.

The Spanish especially honor the cow at Christmas because it is thought that when Mary gave birth to Jesus the cow in the stable breathed on the Baby Jesus to keep him warm.

Christmas is a deeply religious holiday in Spain. The country's patron saint is the Virgin Mary and the Christmas season officially begins December 8, the feast of the Immaculate Conception.

It is celebrated each year in front of the great Gothic cathedral in Seville with a ceremony called los Seises or the "dance of six."

Oddly, the elaborate ritual dance is now performed by not six but ten elaborately costumed boys. It is a series of precise movements and gestures and is said to be quite moving and beautiful.

Christmas Eve is known as Nochebuena or "the Good Night." It is a time for family members to gather together to rejoice and feast around the Nativity scenes that are present in nearly every home. A traditional Christmas treat is turron, a kind of almond candy.

December 28 is the feast of the Holy Innocents. Young boys of a town or village light bonfires and one of them acts as the mayor who orders townspeople to perform civic chores such as sweeping the streets. Refusal to comply results in fines which are used to pay for the celebration.

The children of Spain receive gifts on the feast of the Epiphany. The Magi are particularly revered in Spain.

It is believed that they travel through the countryside reenacting their journey to Bethlehem every year at this time.

Children leave their shoes on the windowsills and fill them with straw, carrots, and barley or the horses of the Wise Men. Their favorite is Balthazar who rides a donkey and is the one believed to leave the gifts.

The Spanish Christmas is Navidad, people go to church, exchange presents, and many play on swing sets set up especially for the occasion.

Swinging at solstice time evokes an ancient desire to encourage the sun, urging it to "swing" ever higher in the sky.