Madrid is the capital of Spain 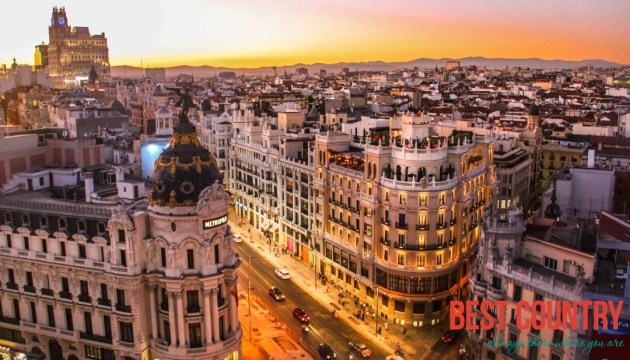 The city is located on the Manzanares river in the centre of both the country and the Community of Madrid (which comprises the city of Madrid, its conurbation and extended suburbs and villages); this community is bordered by the autonomous communities of Castile and León and Castile-La Mancha.

There are many places of interest. Such as:

Royal Palace of El Pardo. A little village in the municipality of Madrid (8 km. from the city center) and close of "Palacio de la Zarzuela" (residence of the King of Spain), surrounded by mountains and the location of the "Palacio de El Pardo" (El Pardo Palace), Franco′s residence between 1940 until his death (1975). It was a former residence of the Kings of Spain.

Templo de Debod. An Egyptian temple, located in one of Madrid′s most beautiful parks. Near the Royal Palace and Plaza de España, it was a present given by Egypt to Spain for its role in saving the temple of Abu Simbel from the floodwaters of Lake Nasser following the construction of the Aswan Dam in southern Egypt. A great place to watch the sunset.

El Retiro Park. The main park of Madrid, the perfect place to take a rest during a sunny day, or take part in the drum circles around the statue of Alphonso XII on summer evenings. There is a large boating lake where one can hire a rowing boat. There is a monument to the victims of the Madrid 3/11 terrorist bombings, the Forest of the Absent, and the Crystal Palace, a large structure entirely made of glass.

Puerta del Sol. This plaza is the "heart" of Madrid and one of the busiest places in the city, and a favourite meeting spot for locals. On the north side of the plaza there is a famous statue of an oso (bear) climbing the madroño tree, which is the symbol of Madrid. Also in Sol, just in front of the Capital building of the community of Madrid, is Kilometer Zero, a plaque showing the point where the measuring of national highways begins. Both the bear statue, and Km. Zero are common meeting spots for friends. The giant neon Tío Pepe sign above the plaza is also a famous fixture of this area. New Year’s celebrations are broadcast from Sol every year with the ringing of the clock bringing in the new year.

Palacio Real(Royal Palace) is an enormous palace, the biggest one in Europe in its kind, with scorching plains of concrete around it and the Real Armorial (Royal Armory), a two-story collection of medieval weapons and armor. Though it is the official residence of the King of Spain, the royal family does not actually reside here and it is generally used only for state ceremonies. The Royal Palace is considered to be one of the most emblematic and beautiful buildings in Madrid, not only for its location but also for its architecture and the artistic treasures to be found in its rooms. The façades of the palace measure 130 meters long and 33 meters high with 870 windows and 240 balconies opening on to the facades and courtyard. It has a surface area of 100,000 square meters with 44 stairways and more than 30 principal rooms.