As San Marino is a microstate completely landlocked by Italy, Sammarinese cuisine is strongly similar to the Italian cuisine, especially that of the adjoining Emilia-Romagna and Marche regions. However, although partly based on a typical Mediterranean diet, it also draws on a richer eclectic cuisine and has a number of its own unique dishes and products. 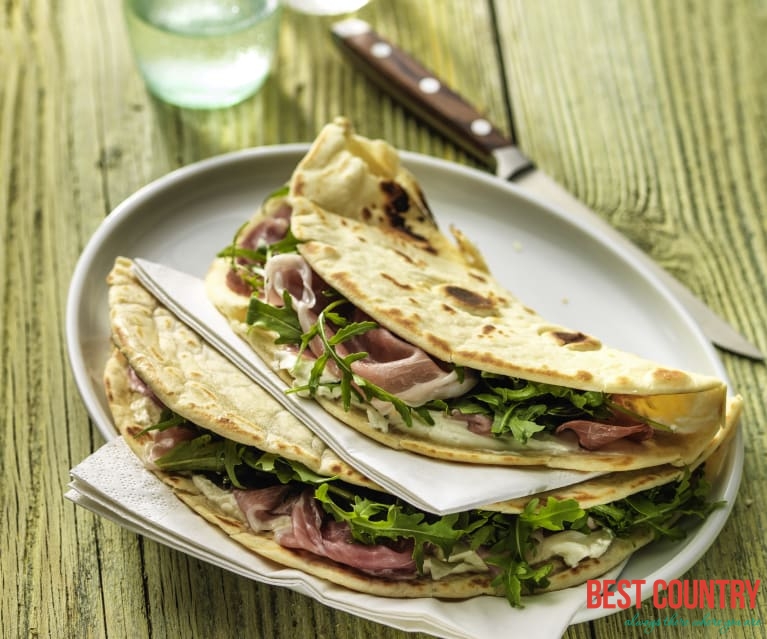 There is also a dish found mostly in Borgo Maggiore called a Piada, which is something similar to a piadina from Emilia-Romagna.

Sweets include a cake known as Torta Tre Monti ("Cake of the Three Mountains/Towers"), based on The Three Towers of San Marino and similar to a layered wafer cake covered in chocolate; Torta Titano, a layered dessert made with biscuit, hazelnuts, chocolate, cream and coffee, also inspired by San Marino's central mountain, Monte Titano.

Bustrengo, a traditional Christmas cake made with honey, nuts and dried fruit; Verretta, a dessert made of hazelnuts, praline and chocolate wafers; Cacciatello, a dessert made with milk, sugar and eggs, similar to Crème caramel; and zuppa di ciliegie, cherries stewed in sweetened red wine and served on white bread.

The region also produces a number of wines such as Brugneto and Tessano (cask-aged red wines) and Biancale and Roncale (still white wines).

Its liqueurs include the aniseed-flavoured Mistrà, the truffle-flavoured Tilus and the herbal Duca di Gualdo.