One of the joys of a Belgium vacation is trying the Belgian food. Restaurants in Belgium are known for offering some succulent meals, and though the food in Belgium is heavily influenced by French tendencies, the country manages to inject its own flavors.

When exploring the cuisine of Belgium, you simply must put your diet on hold. French fries, which were invented in Belgium, are something that all visitors should sample, and by all means do whatever you can to taste some of Belgium’s fine chocolate. It’s the best chocolate in the world, according to many connoisseurs, so don’t be surprised if you’re stuffing your carry-on full of it.

Quality Belgian restaurants can be found all over the country, and in tourist-rich hangouts like Brussels, Brugge, and Ostend, you can stop at a modest bistro for a meal or opt for a fine-dining experience at a Michelin star-touting establishment.

Some of the best Belgian restaurants can be found at the more upscale Belgium hotels, and many of these hotels also offer wonderful breakfast buffet spreads, complete with smoked fish, both cold and hot meats, fruits, cereals, breads, and eggs.

Wherever you go in Belgium, it seems that a Michelin rated eatery is never too far off, which is indicative of just how good Belgian restaurants can be. Michelin stars are awarded to restaurants by the Michelin company, which was born in 1900 in France.

These stars are a benchmark for quality in the restaurant industry, and the highest-rated restaurants can garnish a total of 3 stars. Even the Belgian restaurants that have just 1 Michelin star are of exceptional quality.

Belgian cuisine has been shaped not only by France, but by a number of other countries and empires, as Belgium has seen centuries of invaders vying for power.

Meat makes it onto the menu with frequency in Belgium, and not only is beef, pork, and chicken often featured, but so are gamier meats, such as grouse, quail, and duck. Delicious breads and that famous Belgian beer often accompany meat-based meals, so you’ll have to indulge in both while sampling the food in Belgium.

For a native meat dish that is prepared in the French-speaking region of Wallonia, you can look for Jambon d’Ardenne when visiting Dinant or Liege. It is a dish that features ham from the beautiful Ardennes area. While hanging out in Liege, meat-lovers will also want to try Boudin de Liege, which is a delicious sausage that is flavored with any number of herbs.

The Flemish region of Belgium, which stretches north of Brussels and west to the North Sea coast, is an excellent part of the country in which to try seafood.

Coastal towns and cities like De Panne, Ostend, and Knokke are known for their quality seafood restaurants, and at some point during your trip, you should indulge in some Belgian mussels.

Mussels are cooked in a number of different ways in Belgium, and you’re sure to find a method that you prefer if you do a bit of firsthand research. Some Belgian fries, an immaculate Belgian beer, and a delicious medley of Belgian mussels are sure to satisfy most any food fanatic.

Eels are widely consumed all over Belgium, and one of the most popular ways of serving them is in a green herb sauce.

Crayfish prepared in a buttery, white wine cream sauce is something to look into as well, and some gray shrimp croquettes are a nice lead in to just about any meal.

When in Brugge, Antwerp, or any other Flemish town or city, another seafood dish you will come across is Sole a l’Ostendaise, which is a fancy way of saying sole that is served with a delicate white wine sauce.

As for beef-based dishes, it’s hard to get any more Belgian than Beef cooked in Belgian beer. Belgium makes some of the best beer in the world, so it only makes sense that it be used in Belgian food recipes. 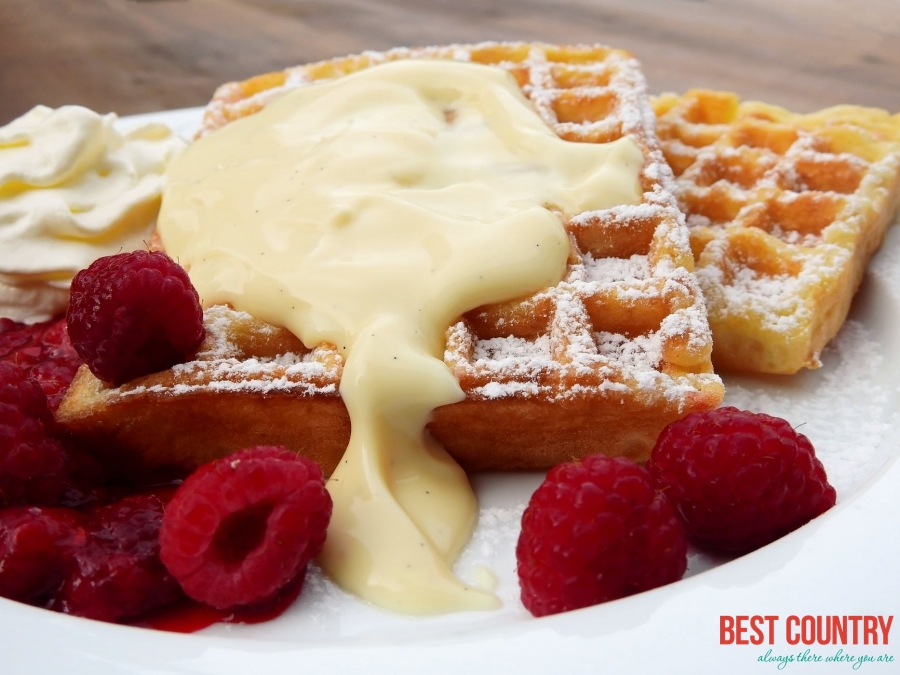 To finish off a meal at one of the Belgian restaurants, you can ask for a Belgian waffle, which is utterly divine. You can find these amazingly-addictive treats all over Belgium.

Not only are they served in gourmet Belgian restaurants, but they can also be bought from street vendors. And don’t forget Belgian chocolate, though that would be nearly impossible to do.

If nothing else, at least treat yourself to one praline. Pralines are Belgian candies that involve a chocolate shell stuffed with a cream or nut paste. Until you try one, you won’t know just how delicious they are.