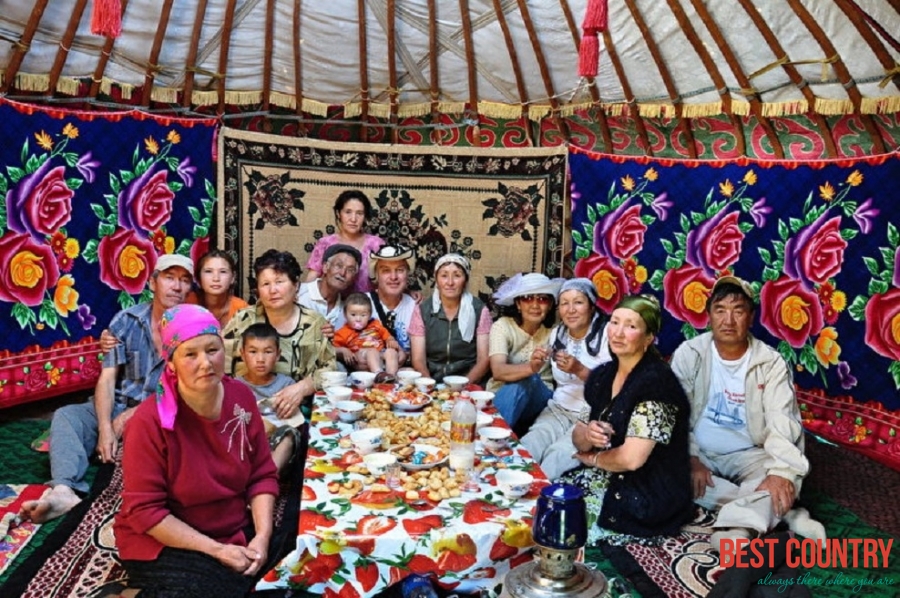 As everywhere in the world, weddings tend to be big and joyous affairs.

Much of the ceremony and traditions of the wedding has developed over the years and been succumbed to various Soviet and Western influences, and there may also be regional differences.

For example, in the south where Uzbek influences are great, a young girl makes handkerchiefs (or serviettes) by cutting out squares of brightly colored material and the trimming it with macrame edging.

These handkerchiefs are then given out to guests who come to see the bride after the wedding. Quite often the bride will be given a number of dresses and each day she will wear a different one until she has worn them all.

Once the future groom informs his relatives of his intention to marry – assuming he doesn’t intend “stealing” her - the family visit the bride’s home and discuss the arrangements with her.

Once an agreement has been reached, the groom places some golden earrings on his chosen bride and the couple are engaged. The custom of giving earrings is called “soiko saluu”.

Traditionally, there is a definite hierarchy of weddings. The eldest son has to take a bride before his younger brothers can. The youngest son has to wait for all of his elder brothers to get married before he can attend his own wedding. Although this tradition is sometimes short-circuited it is more usual for it to be honored than to be breached.

Kalim (“bride price”) – is a dowry to the girl’s family – usually in the form of livestock, (sheep, horses, cattle … and, of course, money), but other articles are also given.

Some families even make their own blankets, tush kiyiz, clothes and so forth. According to one source – the price of a bride can be as much as five horses – but a lot may depend upon the status of the relative families.

He also has to pay for the wedding ceremony. (In sedentary societies - Uzbek and Uighur – it is usually the bride’s family that pay the dowry to the husband).

The groom gives his wife a dress, and she gives him a suit. These days, western style clothes may be preferred.

Traditionally, however, the bride’s dress was long, white with fancy embroidery in fine threads, and embellished with beads and sequins. On her head she wears a tall conical hat with a veil to cover her face. She will also wear jewelry made from gold, jewels, pearls and coral, which may well be a family heirloom – handed down through the family for generations.

The groom would wear clothes made from dark velvet. A long coat, fasted with a leather belt, often decorated with silver, gold and jewels. The edges of the jacket may be embroidered with traditional patters.

You may see costumes like these in a number of places – and many ensembles performing Kyrgyz traditional music dress in them. At the Weddings Palace, attendants in national dress may line the approach in welcome for the couple and their guests.

The bride’s mother, sisters in law and friends erect a white yurt – and the groom’s party come to collect her and take her away.

There is a custom, called Arkan tosuu”, where a rope (“arkan”) is placed across the road and a ransom is demanded for the bride, accompanied by songs and jokes. At this point the bride’s mother and female friends sing a “koshik”, or wail, to say “goodbye”.

The new bride spends three days in the home of her new in-laws, behind a curtain and visitors come to visit, to see the bride. A small fee has to be paid – and compliments are showered on her.

During the Soviet period weddings lost much of their religious significance, and although religion is now enjoying a revival, many still opt for a civil ceremony at the local registry office (ZAKS). In the larger towns there is a special “Weddings Palace” – in Bishkek it is a large, white marble building on Sovietskaya near the Circus, almost opposite the National Library.

Many couples now also go to church or mosque for a blessing of the union – but this may be on a different day. Some couples invite a mullah to the wedding to issue a blessing.

Rings are placed on the ring finger – usually by both husband and wife.

After the ceremony there is usually a promenade – a visit to a number of scenic spots (e.g. the war memorial, a park …) for photos, before attending the reception.

During the reception ceremony it is important for everyone to stand and utter their wishes for the couple – starting with the respected elders (the Aksakals) and working through all the participants.

The couple normally live with the groom’s family until moving into a home of their own. (If the groom is the youngest son, then they will stay with his parents because, traditionally, it is his “duty” to look after his parents and he will eventually inherit their home).

Tradition has it that the bride cannot return home to visit her parents until after there has been a ceremonial visit – otko kiruu - when she is accompanied by her new family who will offer a large present – soot akysy – to her mother as if to compensate for all the troubles and expenses she has endured in bringing up their “new daughter”.

In some ways, the role of the daughter in law is basically one of subservience and servitude – she waits on her own husband and his parents. Once she has given birth to her firstborn child, or a younger daughter-in-law is accepted into the family, then her status in the family is raised.

In his novella, “Djamila” – one of his earliest published works – Chinghiz Aitmatov explores some of the tensions of traditional family life as experienced by the heroine, Djamila, whose husband is away fighting at the front during the Second World War.

In the West, marriages tend to occur late in life – in Denmark for example, the average age for women to get married is about 30; in France it is 27. In the days of the Soviet Union, most of the brides and grooms in Kyrgyzstan were under 20.

There may have been several reasons for this. It is suggested, for example, that one was that marriage brought a certain status. Apparently there now is a current trend in Kyrgyzstan for young people to put off being married until later in life.

There are also regional differences within Kyrgyzstan concerning the age at which people get married. It is common for girls to marry younger than men.

However, it appears that there are distinct geographical atterns discernable. In some areas (such as the Ferghana valley in the South and in the lowlands) both parties marry young.

In other areas, (such as Bishkek and the Chui valley) both sexes delay marriage. In yet others, (such as the northern, remote, mountain areas) there is a tendency for older men (say at 30) to marry younger girls (say 20).