Tea (black or green) is common and comes in various forms. In the North of the country it is usually made strong and mixed with hot water when served – but in the South it is poured direct from the pot. 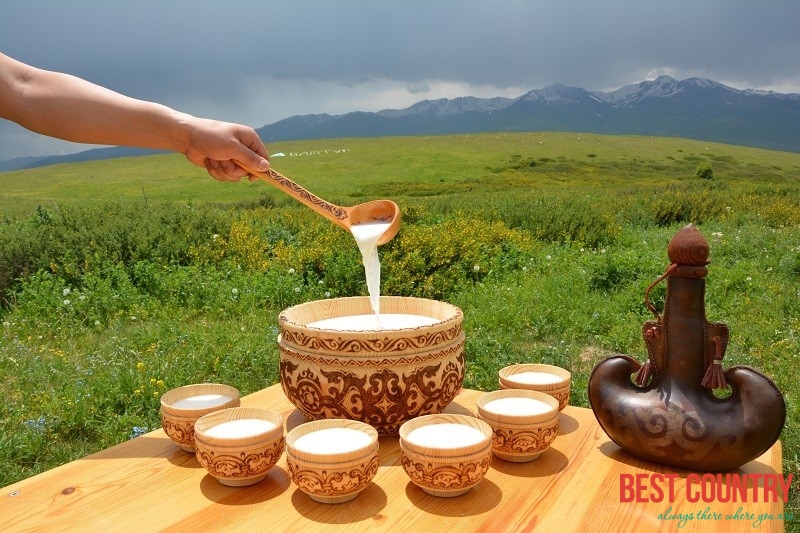 Don't be surprised if you see the hostess pour the first few cups back into the pot – this is normal. It may well be served in a small bowl rather than a cup. Coffee is more likely to be instant served, without milk.

Chalap – a traditional drink that you might encounter in rural areas. It is made from korut (small balls of cheese made from sheep milk) and then diluted with cold water.

Kumys – (or koumiss) - fermented mare's milk, is an acquired taste. Kumys is sold from the roadside throughout the country in the summer but it is best from the herders themselves in more remote mountain regions such as around Son-Kul.

Refusing a drink of kumys can cause offence. The traditional way of making koumiss is for mare's milk to be stored in animal skins (chinach), which has been cleaned and smoked over a fire of pine branches to give the drink a special smell and taste.

One third of yesterday's milk is mixed with new milk and allowed to ferment in the warmth of the yurt. It is then churned, beaten with a wooden stick (a bishkek) and becomes alcoholic before turning into lactic acid.

In the 1840's, Russian doctors discovered that kumys had curative properties and used it for treating tuberculosis, anemia, chronic lung diseases and gynecological and skin diseases.

Some 16 special sanatoria were established which treated patients with lots of fresh air, exercise and koumiss.

They served a number of famous people including members of the imperial family, Lev Tolstoy, Maxim Gorky, and even a minor British Member of Parliament who made the journey to Central Asia especially to undergo the treatment.

Unfortunately, traditional kumys can be stored for only up to three days, so production is limited to the milking period of mares.

To solve this problem, a method of producing pasteurised kumys was developed allowing treatment all year round, and even export. A special facility has recently started for the production of pasteurised kumys in the Naryn region.

Maksim - (Shoro is a brand name which is sold from Barrels on Bishkek streets) – is a wheat based drink that Kyrgyz like to drink in the summer and is said to be particularly healthy. Sometimes you might come across it under the name Jarmah .

Airan (also known as Kefir) – is a milk drink that resembles a drinking yoghurt.