Kyrgyz food reflects its location and history, with its main influences drawn from the necessities of a nomadic life in a relatively harsh climate. 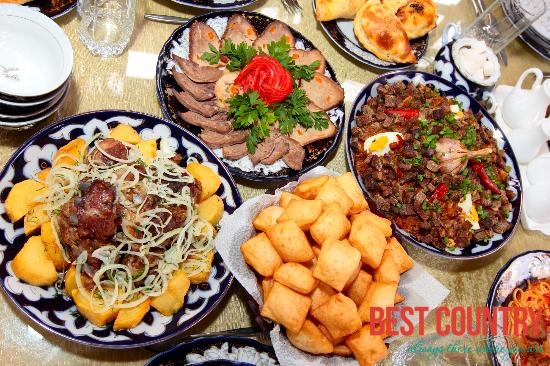 Mutton features prominently, as do wheat products like bread and noodles. Slavic colonisation has also meant that typical Russian dishes feature prominently too, especially in the north of the country.

Other important influences come from China, Korea and Uzbekistan.

The choice of food in the capital, Bishkek, is much wider, with restaurants serving cuisine from all over the world from countries such as Italy, India, Turkey and Georgia.

• Mutton is the staple meat, usually served with plenty of fat according to Kyrgyz taste.

• Shashlyk (skewered chunks of mutton barbecued over charcoal) and lipioshka (round unleavened bread) are often sold on street corners.

• Plov, rice fried with shredded turnip and scraps of mutton, served with bread, is a Central Asian staple that is popular in the southern, Uzbek-dominated areas of the country.

• Samsa are baked triangular parcels of pastry filled with mutton and onions, a little like non-spicy Indian samosas.

• Beshbarmak is a meal made primarily on special occasions that consists of noodles with shredded, boiled meat in bouillon. Around Lake Issyk-Kul, the noodles are sometimes served with jellied potato starch rather than meat.

This is becoming more customary, especially in international hotels and smart Bishkek restaurants. 10% is sufficient. Elsewhere, just round up the bill slightly.

• Koumys (fermented mares' milk) is mildly alcoholic and an acquired taste. It can be widely found in the countryside; refusing an offer of koumys may cause offence.

• Shoro is a well-known proprietary brand of maksym, a wheat-based soft drink.

• Beer, vodka and local brandy are all widely available in restaurants.