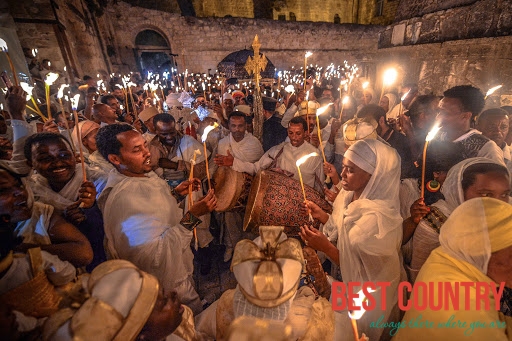 Easter celebration in Israel assumes special significance because a number of Christian rituals have roots in Jewish traditions. The celebration of the Jewish festival of Passover, which commemorates the exodus of Jews from captivity in Egypt, has been intertwined with Easter from the beginning and the Hebrew word Pesach, originally meaning Passover, came to mean Easter as well.

Christian worshippers from all over the world gather in the Holy Land of Jerusalem for Easter celebration. Pilgrims congregate for an Easter sunrise service at the Garden tomb in Jerusalem. Easter mass is celebrated at the ancient Church of the Holy Sepulcher in Jerusalem's walled Old City. Priests and monks in white robes chant the liturgy, as fragrant incense rise above the tomb Christians believe to be the place where Jesus rose from the dead.

In mainland Israel, orthodox Jews celebrate the Passover while Messianic Jews celebrate Easter like the rest of the Christians around the world. The different celebrations arise from the fact that Orthodox Jews do not accept Jesus Christ to be the Messiah sent from God, and therefore they do not celebrate his Crucifixion or his return from the kingdom of death while

During Easter, many processions are held in Israel. These processions travel the route of Jesus Christ's journey to Golgotha. The route is referred to as the ‘Twelve Stations’ of the Cross. Many tourists from different parts of the world also come to take part in this procession. Participating in this procession is considered to be a holy practice for the Christians. So, generally it witnesses a lot of crowd. Processions gather at the holy tomb of Jesus.

At one o'clock in the afternoon on Easter day, the church leader goes into Jesus’ tomb and the doors are closed after him. The lights of the entire city are lit off and later the church bells rings and the church leader comes out with a burning torch. The torch is said to have been lit inside the tomb on its own without any external source. So everyone present in the procession at that time, lights their candles from the holy fire, enlightening the entire church premises. Easter celebrations assume more religious significance in Israel than feasting and celebrations.