It is thought that the first people of Peru came from Asia at around 6000 BC. They were tribesmen who lived by hunting and gathering. Before long, there were small villages where people began to grow beans, squash, chili peppers and cotton. The Peruvians were the first to grow the potatoes.

When a conquistador from Spain named Francisco Pizarro discovered the country in 1528, he was interested in the Incan riches. The Spanish brought pork, lamb and chicken to the Incan people. The Incas then offered the Spanish chili peppers and potatoes. As control transferred to the Spanish, they made the Incas grow crops they brought from Europe such as carrots, barley and wheat.

The three most common foods of Peru are beans, potatoes and corn. They are often combined with many other foods that the Spanish introduced including meat, rice and wheat. The food of Peru is largely made up of dishes that are spicy. It became a blend of local food and food from Spain. Fresh vegetables and fruits, as well as meats are the building blocks of the tropical diet of the Peruvian people. Plantain, bananas and yucca are common.

A common breakfast might include rolls, tea or coffee, and boiled dried corn. Lunch is the largest daily meal. It is often made up of a broth from barley, corn, potatoes; chili sauce with avocados and fresh vegetables; and something cool to drink. Dinner is very filling with potatoes usually served.

Papas a la huancaina - This dish is made up of boiled potatoes that are sliced and served on lettuce with cheese sauce.

Ceviche - This is one of the favorites in Peru. It is spicy and is made of white fish that has been marinated in lime juice and mixed with chili peppers. This dish is often served with boiled sweet potatoes, raw onions and toasted corn.

Papa rellena - This dish is made of potatoes that are mashed and stuffed with a mixture of eggs, ground meat and olives. They are then deep fried.

Arroz con pollo - This is a traditional Peruvian dish. It includes vegetables, rice, chicken and seasonings.

Causa - This is a potato dumpling that is made with yellow potato, onion, oil, chili and key lime.

Carapulcra - This is a flavorful dish of stewed chicken and pork, red chilis, dried potoates, cumin and peanuts.

Empanadas - These are meat turnovers. Filled with chicken, beef or cheese, these favorites are uniquely flavored because of the occasional hard boiled eggs, raisins and olives that are added.

Aji de gallina - This is made up of chicken that is served with a yellow and spicy sauce. It is made of milk, bread, and cheese.

Chicharrones - This dish is made up of deep-fried pork that is very salty. 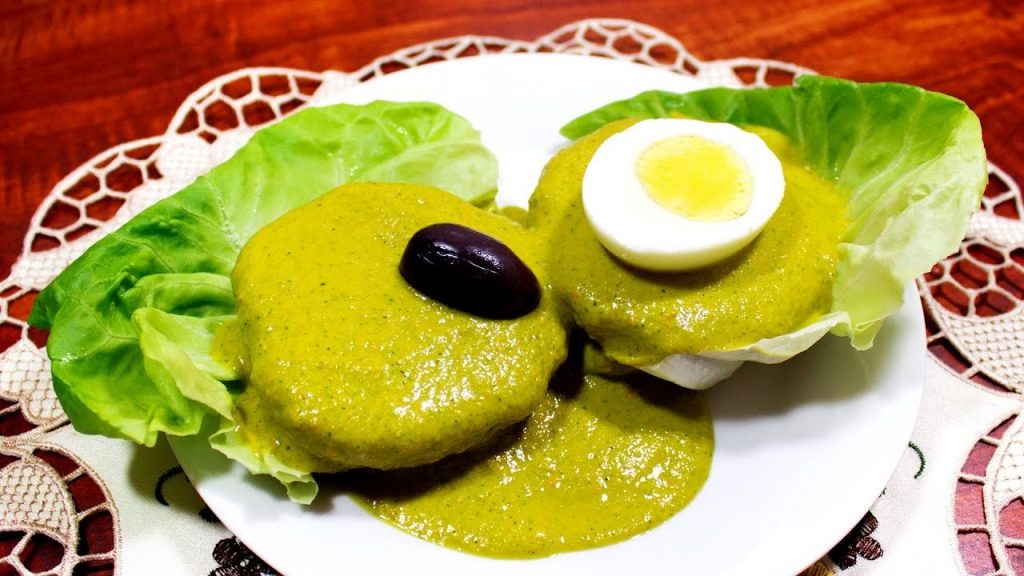 Ocopa - This meal is made up of yellow potatoes that are boiled and sliced, then made of a sauce that is made out of chili pepper, and white cheese. Lettuce, olives and boiled eggs are on the side.