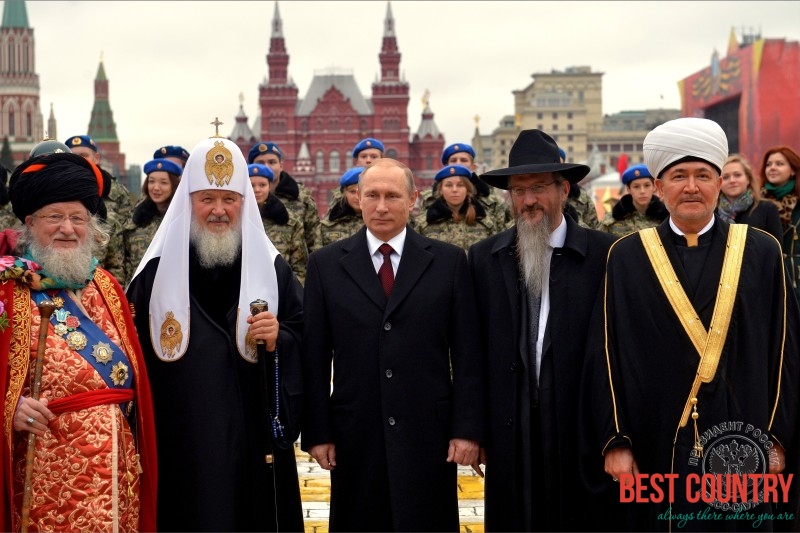 With nearly 5,000 religious associations the Russian Orthodox Church accounts for over a half of the total number registered in Russia. Next in numbers come Moslem associations, about 3,000, Baptists, 450, Seventh Day Adventists, 120, Evangelicals, 120, Old Believers, over 200, Roman Catholics, 200, Krishnaites, 68, Buddhists, 80, Judaists, 50, and Unified Evangelical Lutherans, 39.

Many churches and monasteries have been returned to the Church, including the St. Daniel Monastery, the current seat of the Moscow Patriarchate, the spiritual and administrative center of the Russian Orthodox Church.

Some statisticians estimate the percentage of believers at 40 per cent of the entire Russian Federation. Close to 9,000 communities belonging to over forty confessions had been officially registered in the country.

The majority of religious Russians are Christians. The country has over 5,000 Russian Orthodox churches. Many are built anew or under repair on parish and local budgets money.

Among the several more ambitious projects is the Cathedral of Our Lady of Kazan, erected in Red Square to commemorate the liberation of Moscow by Minin and Pozharsky’s militia, pulled down in 1936, and recently rebuilt from scratch.

The Cathedral of Christ the Saviour, demolished in 1931, is restored. Patriarch Alexis II described its rebirth as "a sublime act of piety and penitence".

Russia had 150 Roman Catholic parishes, two theological seminaries and an academy before the revolution of 1917.

All were suppressed in the Soviet years, and the believers -- ethnic Lithuanians, Poles and Gennans -- were banished and seattered about Siberia and Central Asia.

83 communities have reappeared by now, and Apostolic Administrations linked to the Vatican have been established in Moscow for European Russia, and in Novosibirsk for Siberia.

There are four bishops and 165 priests working among the approximately 1,300,000 Catholics in the country. The theological seminary, Mary Oueen of the Apostles, opened in Moscow in 1993 and was transferred to St. Petersburg in 1995.

The two million Protestants have 1,150 communities.

The nineteen million Muslims, the second largest religious community in Russia, have over 800 parishes and mosques, mostly in Bashkortostan, Daghestan, Kabarda-Balkaria, North Ossetia, Tatarstan, Ingushetia, and Chechnya. The Muslim Board for Central European region has been re-established.

Buddhism is widespread in Buryatia, Kalmykia, Tuva, and the Irkutsk and Chits regions. The Russian Federation currently has ten datsan monasteries, with the total monastic body approaching 200. Another ten monasteries are under construction.

The Russian Federation has 42 Jewish communities. Moscow accounts for over 10 per cent of Russian Jews, and has three synagogues, one of which is Hasidic.