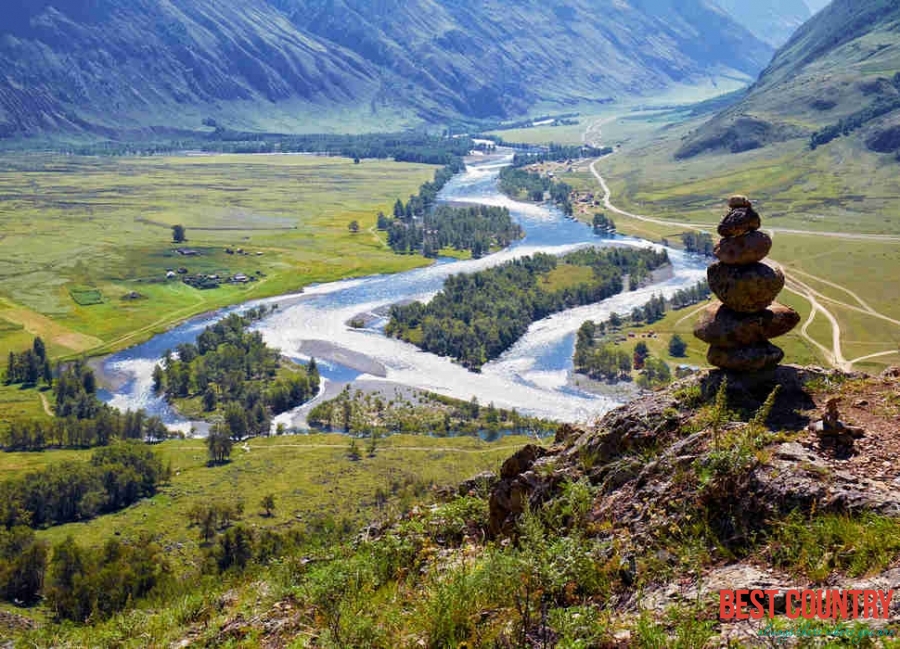 Russia has a largely continental climate because of its sheer size and compact configuration. Most of its land is more than 400 kilometers from the sea, and the center is 3,840 kilometers from the sea. In addition, Russia's mountain ranges, predominantly to the south and the east, block moderating temperatures from the Indian and Pacific oceans, but European Russia and northern Siberia lack such topographic protection from the Arctic and North Atlantic oceans.

Because only small parts of Russia are south of 50° north latitude and more than half of the country is north of 60° north latitude, extensive regions experience six months of snow cover over subsoil that is permanently frozen to depths as far as several hundred meters. The average yearly temperature of nearly all of European Russia is below freezing, and the average for most of Siberia is freezing or below. Most of Russia has only two seasons, summer and winter, with very short intervals of moderation between them. Transportation routes, including entire railroad lines, are redirected in winter to traverse rock-solid waterways and lakes. Some areas constitute important exceptions to this description, however: the moderate maritime climate of Kaliningrad Oblast on the Baltic Sea is similar to that of the American Northwest; the Russian Far East, under the influence of the Pacific Ocean, has a monsoonal climate that reverses the direction of wind in summer and winter, sharply differentiating temperatures; and a narrow, subtropical band of territory provides Russia's most popular summer resort area on the Black Sea.

In winter an intense high-pressure system causes winds to blow from the south and the southwest in all but the Pacific region of the Russian landmass; in summer a low-pressure system brings winds from the north and the northwest to most of the landmass. That meteorological combination reduces the wintertime temperature difference between north and south. Thus, average January temperatures are -8°C in St. Petersburg, -27°C in the West Siberian Plain, and -43°C at Yakutsk (in east-central Siberia, at approximately the same latitude as St. Petersburg), while the winter average on the Mongolian border, whose latitude is some 10° farther south, is barely warmer. Summer temperatures are more affected by latitude, however; the Arctic islands average 4°C, and the southernmost regions average 20°C. Russia's potential for temperature extremes is typified by the national record low of -94°C, recorded at Verkhoyansk in north-central Siberia and the record high of 38°C, recorded at several southern stations.

The long, cold winter has a profound impact on almost every aspect of life in the Russian Federation. It affects where and how long people live and work, what kinds of crops are grown, and where they are grown (no part of the country has a year-round growing season). The length and severity of the winter, together with the sharp fluctuations in the mean summer and winter temperatures, impose special requirements on many branches of the economy. In regions of permafrost, buildings must be constructed on pilings, machinery must be made of specially tempered steel, and transportation systems must be engineered to perform reliably in extremely low and extremely high temperatures. In addition, during extended periods of darkness and cold, there are increased demands for energy, health care, and textiles.

Because Russia has little exposure to ocean influences, most of the country receives low to moderate amounts of precipitation. Highest precipitation falls in the northwest, with amounts decreasing from northwest to southeast across European Russia. The wettest areas are the small, lush subtropical region adjacent to the Caucasus and along the Pacific coast. Along the Baltic coast, average annual precipitation is 600 millimeters, and in Moscow it is 525 millimeters. An average of only twenty millimeters falls along the Russian-Kazak border, and as little as fifteen millimeters may fall along Siberia's Arctic coastline. Average annual days of snow cover, a critical factor for agriculture, depends on both latitude and altitude. Cover varies from forty to 200 days in European Russia, and from 120 to 250 days in Siberia.