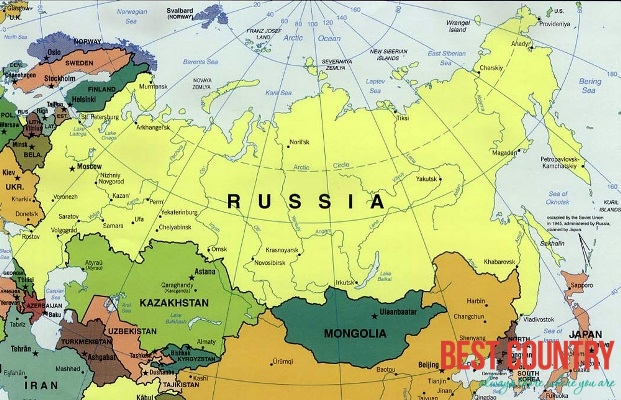 Comprising much of eastern Europe and northern Asia, it is the world's largest country in total area. Due to its size, Russia displays both monotony and diversity. As with its topography, its climates, vegetation, and soils span vast distances. From north to south the East European Plain is clad sequentially in tundra, coniferous forest (taiga), mixed and broad-leaf forests, grassland (steppe), and semi-desert (fringing the Caspian Sea) as the changes in vegetation reflect the changes in climate. Siberia supports a similar sequence but is taiga. The country contains 40 UNESCO Biosphere reserves.

Located in the northern and middle latitudes a of the Northern Hemisphere, most of Russia is much closer to the North Pole than to the equator. Individual country comparisons are of little value in gauging Russia's enormous size and diversity. The country's 17.1 million square kilometers include one-eighth of the Earth's inhabited land area. Its European portion, which occupies a substantial part of continental Europe, is home to most of Russia's industrial and agricultural activity. It was here, roughly between the Dnieper River and the Ural Mountains, that the Russian Empire took shape. It is also located on the northernmost tip of [url=http://www.best-country.com/asia]Asia[/url].

From west to east, the country stretches from Kaliningrad (the exclave separated by the 1990 secession of Lithuania from the then-Soviet Union) to Ratmanov Island (one of the Diomede Islands) in the Bering Strait. This distance is roughly equivalent to the distance from Edinburgh, Scotland, to Nome, Alaska. From north to south, the country ranges from the northern tip of the Russian Arctic islands at Franz Josef Land to the southern tip of the Republic of Dagestan on the Caspian Sea, spanning about 4,500 kilometers of extremely varied, often inhospitable terrain.

Extending for 57,792 kilometers, the Russian border is the world's longest, a source of substantial concern for national security in the post-Soviet era. Along the 20,139-kilometer land frontier, Russia has boundaries with 14 countries: Norway, Finland, Estonia, Latvia, Lithuania, Poland (via the Kaliningrad Oblast), Belarus, Ukraine, Georgia, Abkhazia, South Ossetia, Azerbaijan, Kazakhstan, Mongolia, the People's Republic of China and North Korea.

Approximately 2/3 of the frontier is bounded by water. Virtually all of the lengthy northern coast is well above the Arctic Circle; except for the port of Murmansk—which receives currents that are somewhat warmer than would be expected at that latitude, due to the effects of the Gulf Stream—that coast is locked in ice much of the year. Thirteen seas and parts of three oceans—the Arctic, Atlantic, and Pacific—wash Russian shores.